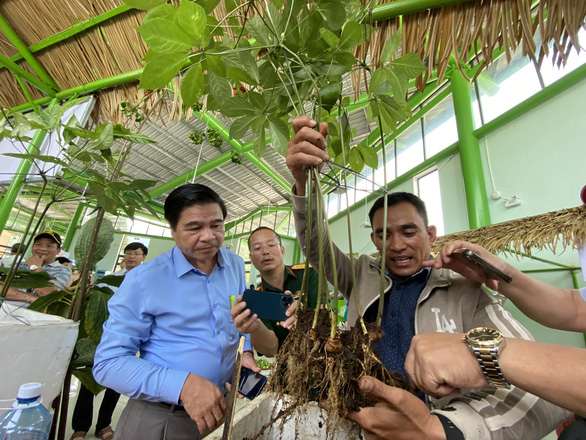 The office of the provincial People’s Committee made the announcement at the conclusion of a committee early last week.

Specifically, Quang Nam’s chairman Le Tri Thanh requested the provincial Department of Culture, Sports, and Tourism to coordinate with the People’s Committee of Nam Tra My District and the Department of Agriculture and Rural Development to assess the benefits of the Ngoc Linh Ginseng Festival.

These agencies were also asked to study and make a proposal to the provincial People’s Committee to hold the national ginseng festival next year in an open manner with the participation of localities cultivating ginseng nationwide.

The event was held for the fourth time from August 1 and 3 this year.

The fest featured a ginseng market which attracted over 4,500 visitors and fetched revenue of around VND10 billion (US$427,408), including nearly VND9.5 billion ($406,037) earned from the sale of about 63 kilograms of Ngoc Linh ginseng roots.

Guests to the fest, in addition to perusing and buying ginseng products at the market, enjoyed a 'cong chieng' (gongs) dance performance, other traditional dances, and traditional costumes of the Ca Dong and Xe Dang ethnic groups.

In addition, they took part in folk games, such as tug of war, stilt walking, catching ducks while blindfolded, pounding rice, land boat races, cheraw dances, and plenty of food.

At a seminar to develop Ngoc Linh ginseng into a national brand jointly held by Tuoi Tre (Youth) newspaper and the People’ Committees of Quang Nam and the Central Highlands province of Kon Tum on August 6, State President Nguyen Xuan Phuc stressed “Ngoc Linh ginseng is a national treasure, which can improve locals’ livelihood.”

“Ngoc Linh ginseng is precious but it should not be put on display only. It should be processed to help create jobs, improve social welfare, and contribute to the national brand development,” State President Phuc added.

Ngoc Linh ginseng, which is considered one of the five most valuable ginseng species in the world, was first found in the Ngoc Linh Mountain area in Quang Nam and Kon Tum Provinces in 1973.

It contains 52 different saponin compounds, and 26 of them are not found in other kinds of ginseng.

In June 2017, Ngoc Linh ginseng was named a national product, according to the Vietnam News Agency.

The province cultivates nearly 10,000 hectares of Ngoc Linh ginseng and 20 enterprises have contracts to lease forests to plant ginseng.