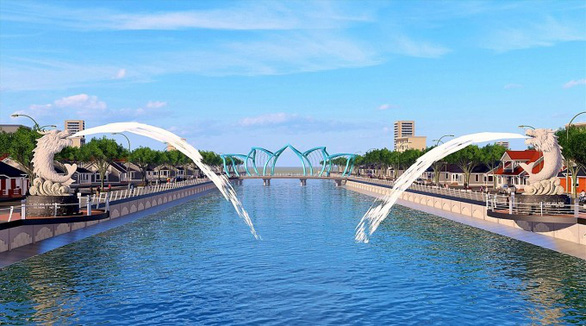 Heeding complaints from the public, the administration of Soc Trang Province in Vietnam’s Mekong Delta region has halted a project involving the construction of two massive carp-shaped fountains on the banks of a local river.

The provincial People’s Committee issued a document asking authorities in Soc Trang City, the provincial capital, to cease the construction of a VND15 billion (US$632,000) decorative project, Tran Van Lau, chairman of the committee, said on Tuesday.

Nguyen Van Quan, secretary of the Soc Trang City Party’s Committee and chairman of the city’s People’s Committee, confirmed that the project would be halted and said the standing board of the committee is working on resolving the issue.

“There are many who oppose the project, so we will likely stop construction. Provincial authorities already agreed to suspend the project,” Zing News – a local publication – quoted a leader of the Soc Trang City administration as saying earlier.

Prior to Quan’s statement, the Soc Trang City administration had issued a resolution to launch the project on the two banks of the Maspero River, with construction expected to start in 2023 and be completed in 2025.

The bill for the project was expected to be footed by the city’s state budget.

After the information about the project was announced, the public began voicing concerns that the money would be better suited for infrastructure that benefited local residents.

According to the project’s blueprint, each bank of the river was meant to have a sculpture depicting a carp transforming into a dragon, built from white stone and a granite-covered concrete base.

One of the statues was designed to measure 5.6 meters tall while the other was envisioned to be 8.32 meters tall.

An artistic LED lighting system was planned to decorate the statues, and a fountain was meant to shoot water from their mouths.