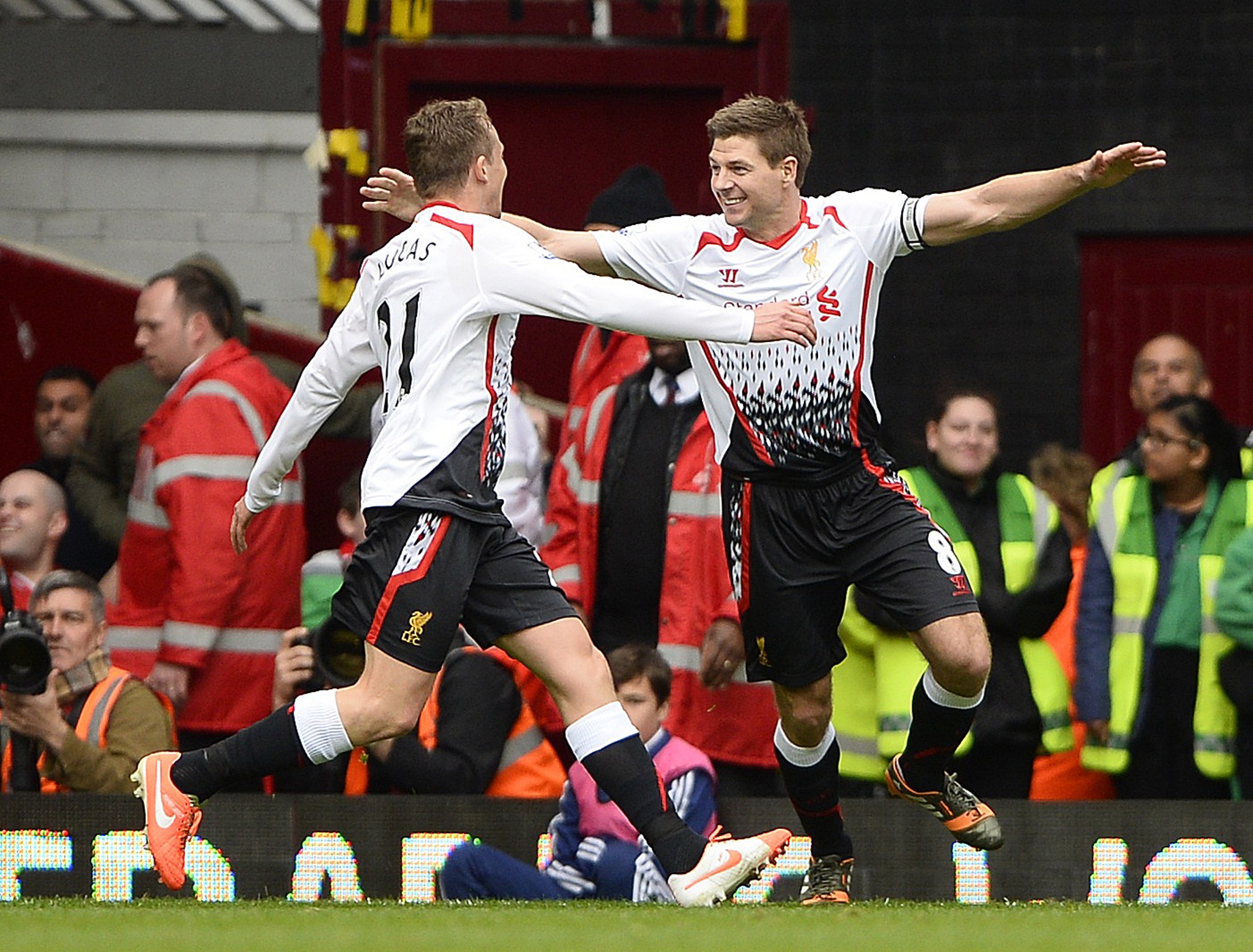 Steven Gerrard scored two penalties as Liverpool went back to the top of the Premier League with a 2-1 win at West Ham United to complete a Merseyside win-double over London clubs on Sunday.

On a weekend when the sporting eyes of the nation were turned to the city following Saturday's Grand National, Everton crushed a woefulArsenal side 3-0 at Goodison Park to boost their chances of a top-four finish and a possible place in next season's Champions League for the first time in nine seasons.

The two crucially important games had a big bearing on the top of the table with Liverpool reclaiming top spot from Chelsea with 74 points from 33 matches, two ahead of Jose Mourinho's side who have also played 33 and went top for 24 hours after beating Stoke City 3-0 on Saturday.

Manchester City, who play Liverpool in a crunch clash at Anfield next week, have 70 points with two matches in hand, followed by Arsenal on 64 from 33 and Everton 63 from 32.

Liverpool, chasing their first title since 1990, continued where Everton left off by chalking up their ninth successive league win, although this one was more about grit than the style of late against a resilient West Ham side.

There was controversy too with Gerrard's second penalty looking like a poor decision by referee Anthony Taylor who was also under the spotlight for allowing West Ham's equaliser.

West Ham manager Sam Allardyce moaned that Liverpool's second penalty should never have been given but he also appeared to blame poor officiating for West Ham's equaliser that came a minute after Gerrard had put Liverpool ahead following a clear handball by James Tomkins.

"Here we are talking about refereering decisions and not a game of football," he told reporters. "Big mistakes were made on those goals."

Liverpool manager Brendan Rodgers thought Liverpool's second penalty was merited and that his team "dominated the game and deserved to win it."

He added: "We are enjoying our football, of course there is pressure on us, but we have won nine in a row which is a phenomenal achievement at this level and we will see what happens. It was a tough game today, but we deserved to win it."

West Ham equalised a minute after Liverpool took the lead after former Liverpool striker Andy Carroll appeared to foul Liverpool keeper Simon Mignolet in the build-up. The ball dropped to Guy Demel who swept it in.

Referee Taylor had a long discussion with his assistant before allowing the goal to stand.

Taylor ruled that West Ham keeper Adrian brought down Jon Flanagan although TV replays showed the goalkeeper got a hand to the ball first.

Gerrard, who also scored two penalties against Manchester United last month, made no mistake with his second spot kick, blasting the ball past Adrian into the corner of the net.

West Ham remain in 11th place and ran Liverpool close with Carroll crashing a header against the bar early in the second half that would have put them ahead.

Everton's sixth successive Premier League win meant that although they stayed in fifth place, they are only a point behind fourth-placed Arsenalwith a match in hand in the tight race for Champions League qualification.

They would move above Arsenal next weekend if they avoid defeat at bottom club Sunderland.

Steven Naismith, following up a rebound off the legs of goalkeeper Wojciech Szczesny, put Everton in front after 14 minutes before a superb solo effort from Romelu Lukaku after 34 put Everton in total command.

They wrapped up the points on the counter-attack after 62 minutes when a Kevin Mirallas shot went in off Arsenal's former Everton midfielder Mikel Arteta for an own goal.

It was Arsenal's second heavy defeat on Merseyside in two months after they lost 5-1 at Liverpool and it ended any lingering hopes of a late title challenge.

Everton manager Roberto Martinez was understandably a happy man afterwards saying: "In terms of satisfaction that you can get as a manager, that's as good as it gets.

"I thought the performance from the first minute to the last was very strong in every department of the game.

"The players were phenomenal - their awareness, work rate and discipline made it as good a performance as you can get from that point of view."

Arsenal have won only one of their last six league matches and manager Arsene Wenger agreed his side were second best.

"Everton were better, sharper and deserved to win," he said.

"It will be difficult to finish in the top four but first we have to focus on the quality of our performance."

Their gloom deepened with Mathieu Flamini's 10th booking of the season ruling him out of next weekend's FA Cup semi-final against holders Wigan Athletic at Wembley.