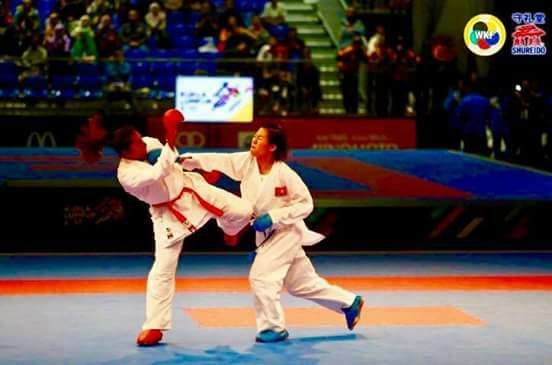 A young karate artist made history for Vietnam in Germany on Sunday after winning gold in freestyle fighting at the 2017 Karate 1-Premier League, the sport’s most famous event.

This is the best ever result in international competition for Vietnamese karate in the kumite (freestyle fighting) discipline.

The Vietnamese athlete won her first qualification round by default and then beat rivals from Turkey, Switzerland, the U.S. and France to advance to the semifinal, where she was challenged by the world champion Alisa Buchinger of Australia.

However, the 19-year-old girl, who is part of the Vietnamese military team, was fearless, defeating her biggest rival 2-0 to make it to the final match-up.

Inspired by her impressive victory against the title holder, Ngoan made a comeback in the bout and beat her Canadian rival Haya to bring home a historic gold medal.

The Karate1-Premier League, held by the World Karate Federation, is the sport's most important competition, comprised of a number of the most prominent international karate competitions.

The Leipzig league is also one of the key parts of qualification for the 2020 Olympic Games, with points earned at the event playing a part in the configuration of the world rankings.

Ngoan also won a bronze medal at the 2017 Karate Premier League in the UAE in April and another bronze at the Southeast Asian (SEA) Games in Malaysia last month.