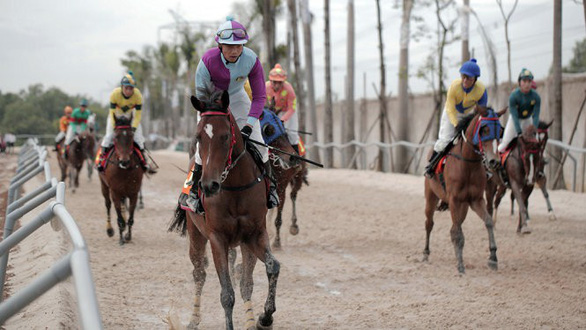 A multimillion-dollar racetrack for horse racing is slated to open in Hanoi by 2021 and expected to bring more tourists and jobs to the area.

The racetrack is estimated to cost around VND10 trillion (US$430 million), Nguyen Van Dung – vice-director of Hanoitourist, one of its developers – said at a press conference in the capital on Tuesday.

Construction has not started yet but it is planned to be built on a vast piece of land over 100 hectares, about the size of 140 football pitches, in Hanoi’s suburban district of Soc Son.

Betting is allowed at the racecourse.

Hanoitourist had sought permission to create the track for more than a decade.

But not until early 2017 did the facility’s construction receive the green light from the government, as it had faced problems in legal documents for up to eight years.

Out of many areas in the country which wish to open horse racing tracks, the Vietnamese government selected Hanoi as the first to experiment with operating a racecourse for tourism purposes.

The tourist company said that once completed, the racetrack would create employment for over 1,000 locals and even possibly for up to 10,000.

The facility may help Hanoi draw a large number of tourists and make them stay in the capital for a longer time, the firm added.