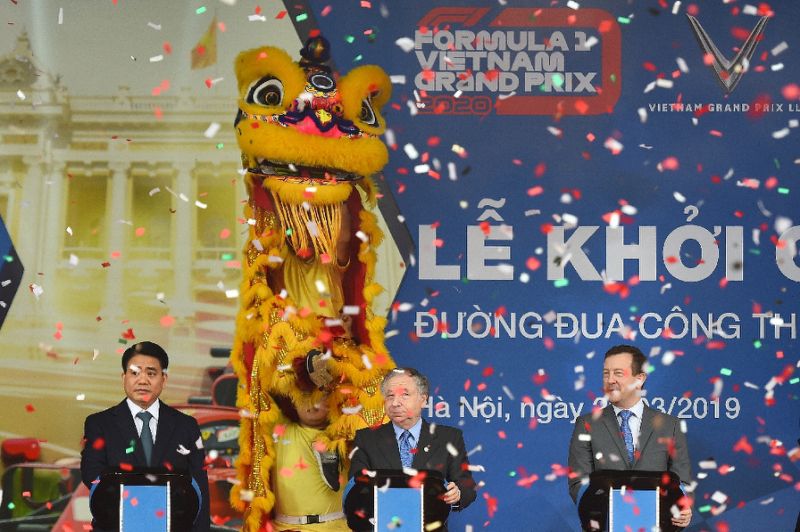 Hanoi -- Formula One chief Jean Todt on Wednesday hailed next year's inaugural Vietnamese Grand Prix in Hanoi as a great opportunity to open doors for people with "a passion" for motorsport in Southeast Asia.

The Vietnamese capital will get its first taste of the high-octane glitz and glamour of Formula One when it hosts its first grand prix from April next year as the sport bids to tap into new markets in the region.

Todt said he hoped Vietnamese fans seeing the likes of five-time world champion Lewis Hamilton and Sebastian Vettel battling wheel-to-wheel on the streets of Hanoi would lead to an explosion of interest in racing of all kinds in football-mad Vietnam.

"It's... fantastic for the development of the motorsport in Vietnam and in the region," Todt, who is president of motorsport's world governing body the FIA, told reporters Wednesday at a groundbreaking ceremony for the new street circuit in Hanoi.

"I really hope that soon here will also be facilities to host cart racing, drifting racing," he added.

Todt hopes the event will breed a new generation of Vietnamese drivers.

"You have young people, talented with a passion for motorsports, that's why I think it's very important to involve very quickly a new category of motorsport," he said.

The 5.6 kilometre (3.5 mile) street track will incorporate existing and yet-to-be-built roads in the My Dinh area of Hanoi near the national sports stadium, about 13 kilometres from the city centre.

Organisers said they decided against holding the race in Hanoi's historical Old Quarter because of logistical challenges and steep costs.

Hanoi has bet big on the event's popularity, signing a 10-year multi-million-dollar deal with Formula One last year reported in state media to be costing Vietnam $60 million per year.

Vietnam said it will not dip into government coffers to pay for the event but instead has secured full financial backing from the country's largest private conglomerate VinGroup.

"F1 is always considered the king of all races... we have designed a challenging street circuit imprinted with Vietnamese identity and architecture," VinGroup deputy chairman Nguyen Viet Quang said at the ceremony.

Vietnam is hoping to emulate the popularity of Singapore's glittering night race and fill a void in the region left after Malaysia pulled the plug on its long-standing race in 2017 for cost reasons.

Malaysia's government, who had bankrolled the event since its inception at Sepang in 1999, said they were no longer prepared to shell out $67 million a year.

Hanoi will hope avoid the problems that dogged Formula One's ventures into South Korea in 2010 and India in 2011.

The first Korean Grand Prix was staged at the southern town of Yeongnam in 2010 under a deal supposed to last until 2016.

But the annual event haemorrhaged money from the outset, with collated losses of around $170 million and the plug was pulled in 2013.

The Indian Grand Prix at Greater Noida was doomed by the government failing to recognise it as a sport, which increased the tax bill for organisers already shelling out an estimated $50 million per race, and dwindling crowds turned off at the lack of a home-grown driver.

It was run just three times, with Vettel winning on every occasion.