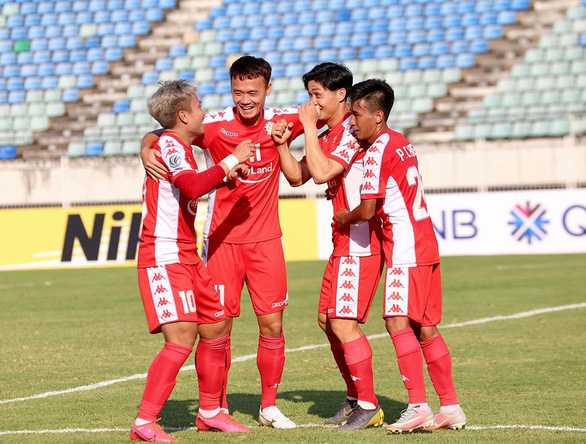 Ho Chi Minh City FC held hosts Yangon United to an exciting draw on Tuesday in their AFC Cup opener in Myanmar, with three headers finding the net of both sides.

The Group F game unfolded in an open manner at Thuwanna YTC Stadium in Yangon, where both sides played offensively.

The visitors were off to a better start and opened the scoring in the 11th minute from a header by Amido Baldé, who netted following a pass from Tung Quoc on the right flank.

Midfielder Maung Maung Win fired past goalie Thanh Thang from 25 meters to put the hosts in the lead four minutes later, in another counterattack.

The visitors placed a lot of pressure on the home team in the remainder of the first half and Chung Hae-seong’s men finally found Yangon United’s net in the dying minutes.

Cong Hien raced into the penalty area and found the ball in the 42nd minute. Star striker Nguyen Cong Phuong then headed Hien’s pass into the net of goalkeeper Zin Htet.

Both sides attacked and missed many chances in the second half, with the game drawing to a 2-2 close.

In the other game of Group F, Laos’ Lao Toyota lost 1-3 at home to Singapore’s Hougang United on Tuesday.

Another club from Vietnam, Than Quang Ninh FC, were beaten 1-4 by Indonesia’s Bali United in Group G the same day.

The AFC Cup is the Asian equivalent of the UEFA Europa League in Europe.