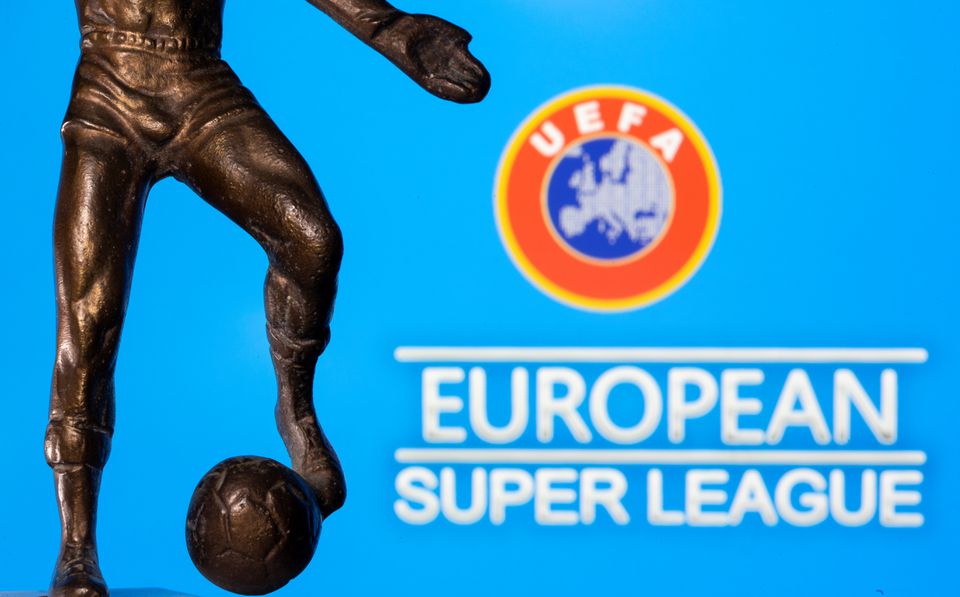 LONDON -- Premier League leaders Manchester City became the first of the 12 founder clubs to withdraw from the new European Super League (ESL) on Tuesday as the project started to disintegrate.

Chelsea were earlier reported by the BBC to be preparing the paperwork to quit the controversial new competition but City made it official.

A brief statement on the club's website read: "Manchester City Football Club can confirm that it has formally enacted the procedures to withdraw from the group developing plans for a European Super League."

Abu Dhabi-owned City were one of six English clubs to join the new competition on Sunday, triggering a torrent of condemnation from within the game and beyond and threats of sanctions by European soccer's governing body UEFA.

The move was praised by UEFA president Aleksander Ceferin.

"I'm delighted to welcome City back to the European football family... It takes courage to admit aa mistake but I never doubted they had the ability and common sense to make that decision. City are a real asset for the game," he said in a statement.

"English football has a proud history based on opportunity for all clubs and the game has been unanimous in its disapproval of a closed league," it said in a statement.

Unlike Europe’s current elite Champions League competition, where teams have to qualify through their domestic league, the founding Super League teams would guarantee themselves a place in the new competition every year.

City's dramatic U-turn came hours after manager Pep Guardiola spoke out against the new competition which would have been almost a closed shop for elite clubs.

The Spaniard said the ESL went against the ethos of sport as 15 of the 20 clubs involved would be permanent members without the threat of relegation.

"It is not fair when one team fights to arrive at the top and cannot be qualified because the success is already guaranteed just for a few teams."

Guardiola said he had been told of the ESL proposal hours before it was announced on Sunday, and called on Real Madrid president Florentino Perez to explain his position.

"I would love the president of the committee to go out around the world and explain how we got this decision," Guardiola said.

The club's website carried Guardiola's candid quotes, a hint of what was to come later.

City and their fellow English breakaway clubs -- Manchester United, Chelsea, Liverpool, Arsenal and Tottenham Hotspur -- have come in for fierce criticism for their plan to join the ESL even from their own fans.

Earlier on Tuesday, the Premier League's 14 other clubs met to discuss the crisis along with the Football Association.

The Premier League issued a statement saying it "unanimously and vigorously rejected" the plans and were considering action to bring the six clubs to account.

With City pulling out and Chelsea set to leave, while Liverpool's players posted a shared twitter message saying they want no part of the new league, the project looks doomed.

British Prime Minister Boris Johnson, who had threatened legislation to stop the six English clubs taking part, said shortly before City confirmed their exit that it would be welcome news.

"The decision by Chelsea and Manchester City is -- if confirmed -- absolutely the right one and I commend them for it," he said. "I hope the other clubs involved in the European Super League will follow their lead."