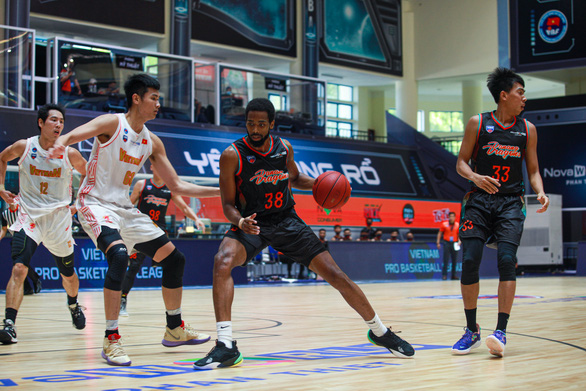 Following their fair share of wins and losses in the previous two encounters with the Vietnamese national basketball team, coach Phan Thanh Canh’s unique tactic helped Danang Dragons dominate most of the play and score a surprising victory in the two sides’ third meeting.

Slyness of only domestic coach at VBA

While the Vietnam team has an advantage with four Vietnamese-born players, they have not yet found someone in the central position -- the most important link in the defense -- that can compete with the foreign players of other opponents.

On the Vietnamese team’s side, Justin Young, who was assigned by coach Kevin Yurkus to block Carter, failed to do so due to their height difference and Young not playing in his strongest position.

This allowed Carter to score at will in Game 35 of the VBA Premier Bubble Games - Brought to you by NovaWorld Phan Thiet.

Danang Dragons held the lead for most of the game, before the Vietnamese team found a way to come back at the end of the third period.

However, Carter’s aggressiveness on the offensive in the first three periods helped Scott keep his fitness till the last quarter and give Danang Dragons the overall victory.

Game 35 was the last appearance of coach Yurkus’ players at the VBA Premier Bubble Games.

The team played beautifully to rebound strongly at the end of the third period before taking the lead at the beginning of the four quarter, thanks to center Khoa Tran, who replaced the injured Tam Dinh.

If the Vietnamese team had won Game 35, Khoa Tran would have been chosen as the Most Valuable Player (MVP) of the game with 26 points and 10 assists.

However, Danang Dragons made a spectacular comeback.

When the Vietnamese team seemed to have secured the victory with the 72-68 lead with just over 40 seconds left, coach Yurkus’s players succumbed unexpectedly as Danang Dragons scored five points to snatch a breathtaking 73-72 victory.

Danang Dragons took on the Vietnamese national basketball team in Game 35 of the VBA Premier Bubble Games - Brought to you by NovaWorld Phan Thiet.

It was also the last game in the tourney for both teams.

Danang Dragons took the lead in the first three periods thanks to Chris Carter, before the final quarter progressed in favor of the Vietnamese team with the brilliance of Khoa Tran.

However, the outcome of the game was reversed once more in the very last seconds by Michael Soy, who had been almost invisible since the beginning of the game.

With 26 points and 15 rebounds, Akeem Scott was named the MVP of the game.