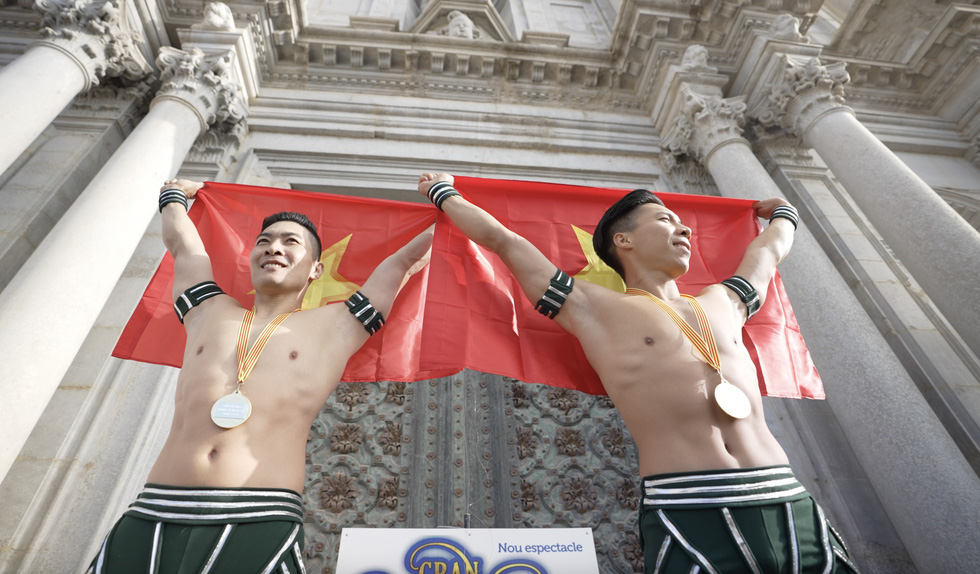 Four years after setting a world record for head-to-head stair climbing at the Cathedral of Girona in Spain, the Giang Brothers – a Vietnamese acrobat duo – once again made history on Thursday.

Giang Quoc Co, 37, and his brother, 31-year-old Giang Quoc Nghiep, wowed fans from all over the world by climbing 100 church steps in 53 seconds while doing a head-to-head balancing act – a feat that shattered their own world record.

The head-to-head stair climb, which started at 1:00 pm CET, or 7:00 pm Vietnam, was done in response to an invitation of the Spain-based Circus Arts Foundation.

The two brothers flew to Spain on December 17 and faced some challenges, as they found practicing quite difficult due to frigid temperatures and slippery stairs.

In just 53 seconds, they conquered 100 steps while doing a head-to-head handstand, breaking the Guinness World Record they set in 2016.

Prior to the historic climb, the brothers were worried that their lack of practice due to the COVID-19 pandemic would affect the record-breaking attempt, but their hesitancy appeared to fall by the wayside as they completed the feat with applause from fans, local government officials from Girona, and a posse of international journalists.

Among the spectators were many overseas Vietnamese who traveled from Barcelona, a city on the coast of northeastern Spain, to cheer on their fellow countrymen.

In December 2016, Co and Nghiep set a new world record by head-to-head climbing 90 steps in 52 seconds, breaking the record held by Chinese duo Tang Tao and Su Zengxian, who ascended 25 consecutive stairs in a minute using the same technique in September 2014.

The Vietnamese acrobatic brothers also set another Guinness World Record in Italy in 2018 for ‘climbing and descending ten stairs backwards while being blindfolded and balancing head-to-head.’

The brothers finished their stunt in just 53.97 seconds, more than six seconds less than the allowable one-minute limit.

Three years ago, Co and Nghiep earned a reputation for themselves over daredevil gymnastics routines that booked them a spot amongst the finalists of Britain’s Got Talent 2018.