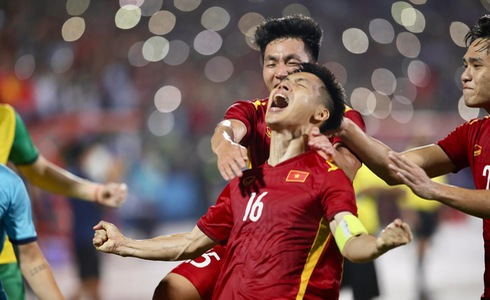 Vietnam moved one step closer to the semifinals of men’s football, which is for under-23 players, at the 31st Southeast Asian (SEA) Games after sealing a 1-0 victory over Myanmar in Group A on Friday night.

The chance for a berth in the semifinals was open to four teams Myanmar, the Philippines, Vietnam, and Indonesia in Group A before Friday's fixtures.

Just three minutes after the game began, a moment of distraction put Vietnam’s defense in danger as Lwin Moe Aung ran up to face goalkeeper Nguyen Van Toan, who was able to save the shot.

Vietnam started pushing forward, but their crossing strategy did not work.

The Golden Stars struggled to find Myanmar’s net despite creating many chances in the remainder of the first half while the visitors maintained the pressure and even had a few dangerous counter-attacks.

The hosts tried various attack plans after the restart but it was not until the 75th minute that Vietnamese players were able to score a breakthrough goal.

Le Van Do ran down the right flank and made a pass to captain Do Hung Dung, whose clinical finish stunned both Myanmarese goalkeeper Pyae Phyo Thu and two other defenders.

The heavy rain at Viet Tri Stadium in northern Phu Tho Province made it tougher for both sides.

The score remained 1-0 until the final whistle.

The victory saw Vietnam ascend to the top of Group A with seven points while Myanmar fell to third place with six points, preceded by Indonesia with six points after overwhelming the Philippines 4-0 in another fixture earlier on Friday.

Vietnam had beaten Indonesia 3-0 on May 6 and drawn 0-0 against the Philippines on May 8.

The Vietnamese will face Timor Leste on Sunday night.

The men’s football event at the 31st SEA Games features two groups, with the five aforementioned teams making up Group A while Group B includes Malaysia, Singapore, Thailand, Cambodia, and Laos.

The top two teams in each group will play in the semifinals.