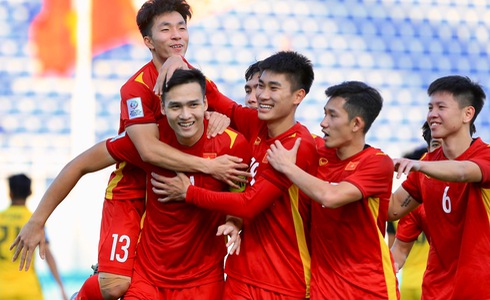 Vietnam advance to U23 Asian Cup quarterfinals after victory over Malaysia

Vietnam defeated Malaysia 2-0 in their final Group C game on Wednesday night to move to second place and make it to the quarterfinals of the 2022 AFC U23 Asian Cup in Uzbekistan.

Nguyen Thanh Nhan passed the ball from the left flank for Nham Manh Dung, who got a powerful header to defeat goalkeeper Firdaus Irman and put Vietnam ahead in the 28th minute.

Manh Dung got another chance to score two minutes later but his shot lacked power.

The ball seemed to cross the line even though keeper Irman caught it.

However, the sideline referee said it was not a goal.

Following an attack inside the box by Quang Nho, the referee gave Vietnam a penalty and Hairiey Hakim a red card for a handball offense after checking VAR for several minutes.

Keeper Irman was able to block skipper Bui Hoang Viet Anh’s penalty shot at first but could not save Viet Anh’s tap-in.

The referee also blew the whistle to end the first half right after the second goal for Vietnam.

The young Golden Stars almost netted a third goal 17 minutes after the restart when Nguyen Thanh Nhan made a cross from the left flank to Nguyen Van Tung, whose shot hit the post.

Vietnam dominated possession in the remainder but did not score more as the 2-0 win was enough to send them to the quarterfinals as Group C's runners-up.

South Korea regained the group's top and advanced with Vietnam after beating Thailand 1-0 in the other fixture that ended a few minutes before the Vietnam-Malaysia tie.

Thailand and Malaysia, ranked third and fourth, respectively, were both eliminated.