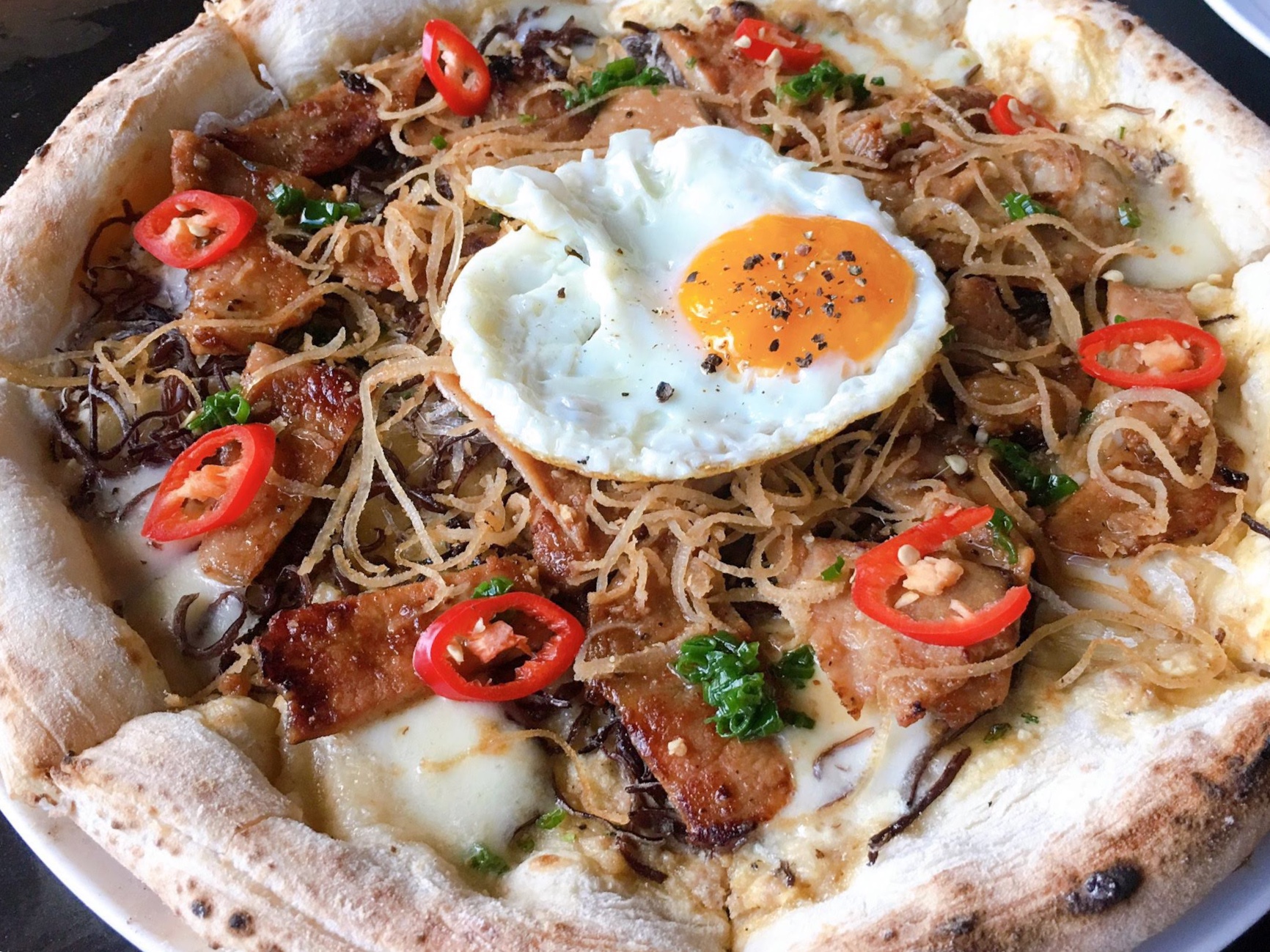 Japanese-run restaurant chain Pizza 4P’s has lured local and expat diners for not only its fine dining foods but also the pizzeria's ‘inventions’ by adding Vietnamese flavors to its pizzas.

The food has become so popular in the southern Vietnamese hub that when someone say, “you haven't been to Saigon if you have yet to eat com tam," people would not disagree.

Even first-time visitors could easily find a com tam stall on every corner, from dawn till dusk.

However, combining pizza and com tam is not a common thing for everyone to think of.

To make the fusion dish, chef Bui The Vinh, who 'invented' the com tam pizza at Pizza 4P’s, tops the pizza with a sauce simulating the cha part in com tam and a layer of cheese before grilling it.

Then he pulls out the pizza from the oven, placing suon and bi on the grilled pizza, before adding some slices of chili pepper and oil grease to enhance the dish’s flavor.

In the final step, Vinh puts a sunny-side up fried egg, a famous optional topping of com tam, over the top.

The com tam pizza is served with Vietnamese daikon and carrot pickles, alongside sweet and sour fish sauce.

In a simplified description, com tam pizza is com tam with the rice base replaced by pizza crust layered with cheese.

“In many countries around the world, it’s not new to combine local cuisines with pizzas,” chef Vinh told Tuoi Tre News.

“Through this com tam pizza, we hope to introduce a pizza for Vietnamese people with a bold Vietnamese identity, and at the same time we'd like to show diners how rich and diversified Vietnamese cuisine is."

Vinh added that it took him around two months to make to realize the novel pizza idea.

He had "wandered all over Saigon" to eat com tam continuously to look into the ingredients as well as the tastes which both Saigonese and foreign tourists favor, in order to develop a dish which could satisfy both.

The com tam pizza has captured tremendous attention from local foodies, with some lauding the idea while others frowned upon the combination.

“Pizza 4P’s is excited to bring this essence of Saigon cuisine to Com Tam Pizza,” the restaurant announced in a Facebook post on August 17, 2019, accompanied by a photo of the dish.

Pizza 4P’s representative Truong Huynh Duc Hai says the restaurant has always made clear to diners that this is a fusion dish, not the original com tam, to make sure first-time visitors to Vietnam do not misunderstand Saigon's signature dish.

The combination could help pique people’s curiosity and encourage them to discover what the real flavor of com tam is.

The com tam pizza is not the first time Pizza 4P’s has 'challenged' its customers.

During the past years, the pizzeria has grown to be a household name among diners in Ho Chi Minh City, Hanoi, and some other provinces in Vietnam.

Some famous dishes on the restaurant’s menu include pizzas served with Japanese-inspired toppings like salmon, Teriyaki chicken, and more.

The com tam pizza is one of the Vietnamese-inspired pizzas served by the restaurant, among those topped with cha ca La Vong (a famous Hanoi dish), stuffed banh mi's topping, and bun dau mam tom (rice noodles with fried tofu and fermented shrimp paste).

Following their introduction, the dishes caused a real stir because for those who know how fermented shrimp paste tastes, it is obviously hard to accept the dish or even unbearable to see it combine with cheese, especially on top of a pizza.