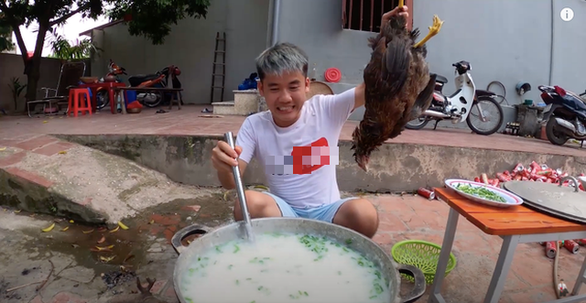 A handful of Vietnamese YouTubers with large numbers of subscribers have stirred criticism for uploading graphic videos, including several that show people eating live animals or raw animal parts.

The content creators who sparked the criticism said their videos are meant to highlight the unique culinary practices of various regions throughout Vietnam.

Running ‘SAPA TV,’ a YouTube channel with over 524,000 subscribers, Hoang Hai shares videos where he, his team, and featured guests eat either large amounts or unusual types of food considered 'specialties' in northern Vietnam’s mountainous localities.

One video, which has garnered over 1.7 million views, shows the channel’s production team using a washtub and cups to collect what appears to be blood flowing from a cut-open goat and subsequently drinking the liquid.

They then opened the goat’s severed head to take out its brain, which they ate raw on camera.

Another video on SAPA TV’s featured channel ‘DOC LA SAPA’ shows Hai’s team biting into live fish which they had just caught from a pond and enjoying it with a side salad.

SAPA TV is just one of  several such YouTube channels depicting vloggers enjoying unique eats of the ethnic minorities in northern Vietnam.

However, A.K., a commenter on DOC LA SAPA’s live-fish-eating video who claimed to be a Thai ethnic from the northern Vietnamese province of Son La, shared that his people and other ethnic communities in the northwestern region of Vietnam do not have “this primitive eating style.”

“We do eat raw fish salad, but we don’t gobble down an entire live fish in such a cruel way,” A.K. wrote in the comment.

“I urge the community to condemn those who take the northwestern culture as an excuse to defame the image of our culinary culture and people.”

Most recently, Nguyen Van Hung, the owner of the ‘Hung Troll’ YouTube channel, has been blasted for a video in which he cooked chicken porridge by putting a whole chicken — feathers and all — into a large pot of boiling porridge on a stove.

The Department of Information and Communications of northern Bac Giang Province, Hung’s hometown, has summoned him for the video which they say goes “against the fine traditions and good customs [of Vietnam].”

Tran Minh Chieu, director of the department, said that it will confer a strict punishment upon Hung according to regulations on sharing content that depicts unsafe food hygiene.

Dr. Vu The Long, a member of the Executive Committee of the Vietnam Culinary Culture Association, publicly condemned the aforementioned YouTubers on a recent program on national broadcaster VTV.

“That act [of eating live animals] advertises an anti-scientific, unhygienic lifestyle that we must condemn,” Long said.