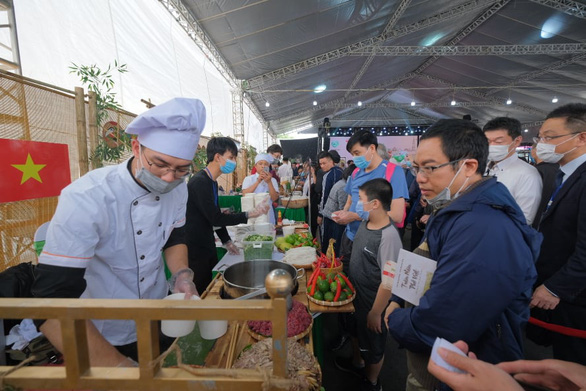 The grand celebration of the fourth ‘Day of Pho’ took place in excitement at AEON Mall Ha Dong in Hanoi on Saturday morning.

December 12 was officially designated as the ‘Day of Pho’ - a celebration of Vietnam’s most popular dish – in 2018, one year after the first 'Day of Pho' was held from the initiative by Tuoi Tre (Youth) newspaper.

This year’s ‘Day of Pho’ is themed “Sublimation of Vietnamese Cuisine.”

Several activities were held in honor of the special day, including the final round of a cooking contest to find the best pho chefs and a vote-based competition to choose the top ten pho brands most favored by consumers in Vietnam, which were also held last year.

Furthermore, a writing and photography contests with the theme ‘Pho in me,’ encouraging both domestic and overseas readers to tell their stories about pho in text and visual formats, received many high-quality entries.

Speaking at Saturday morning’s ceremony, Tuoi Tre's Deputy Editor-in-Chief Le Xuan Trung emphasized that the organizers made their best effort to carry out the celebration day.

“The weather appeared to favor pho lovers. I hope the stories of pho and the love of pho will be widely shared today,” Trung said.

Earlier, a gala dinner titled ‘The Story of Pho’ was also organized in the Vietnamese capital city on Thursday evening within the framework of this year’s ‘Day of Pho’ event, attended by diplomats from the U.S., France, Japan, South Africa, Argentina, and some Southeast Asian nations.

The gala dinner saw Furudate Seiki, first secretary of the Embassy of Japan in Hanoi, enjoying up to five bowls of pho.

Furudate’s huge appetite for pho reminded Trung of one of his friends in Ho Chi Minh City, the Deputy Editor-in-Chief said, who always tries to eat four bowls of pho for four meals during a day on his every business occasion in Hanoi.

According to Trung, the ultimate goal of the ‘Day of Pho’ organizers is not only to help people understand the origin and art of pho cooking, along with the quintessence that makes a delicious pho bowl, but also to support pho cooks to make a true bowl of pho.

From 6:00 am on Saturday, more than 20 contestants participating in the cooking contest to find the best pho chefs had been busy preparing materials for the competition.

Meanwhile, several pho stalls erected at the event attracted a large number of people in the surrounding area and ‘early-bird’ pho lovers.

“The pleasant smell of pho spread in the air as soon as we entered the venue,” said Tuyet, a local woman from Ha Dong District who came to the event with her child.

“I thought cooking pho was simple, but today I find the dish is so diverse in its broth, flavor and is too appealing,” said Tuan, a family member of a contestant in the pho cooking contest.

All proceeds of the event will be donated to underprivileged and hardworking children in Thanh Chuong District, located in the north-central province of Nghe An.