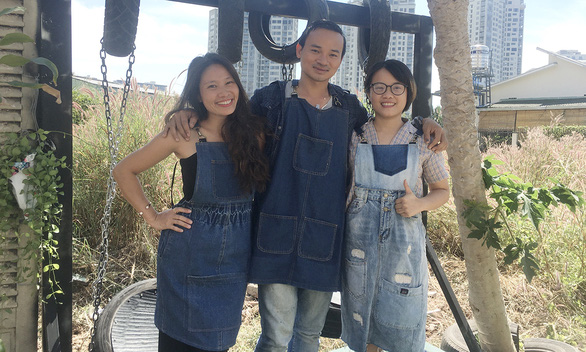 After a decade of wandering around the world, 35-year-old Hoang Thi Trang, originally from the northern province of Nam Dinh, came back to set up a small café in Ho Chi Minh City with decorations made from recycled materials.

Trang’s husband is a director of the German Chamber of Commerce and Industry whose tenure changes every three years.

Each time they moved, Trang had to revamp her life and profession in a different country, which she refers to as a 'three-year start-up circle.'

When in Georgia’s capital city of Tbilisi, Trang realized that she was the only Vietnamese living there while local people had no idea what her motherland was.

“How is the war in Vietnam? Are Vietnamese people living in poverty?” were common questions that Georgian people posed to Trang.

To teach others about Vietnam, its culture and people became her mission back then which partly emerges from her background in ethnography.

One of Trang’s friends in Georgia is a silk painter and they planned to bring silk from Vietnam to create her works on.

Other cultural staples of non la (traditional conical hats) or ao dai were also shipped to the country for a small exhibition.

As the exhibition captured positive attention from the locals, a director of a museum in Tbilisi invited her over for a conversation.

Trang proposed a project on Vietnam for the museum and got approved.

The project was a big hit which opened the door to further collaboration between the Vietnamese woman and the local museum.

She became its official staff later on.

"There are a lot of foreigners knowing nothing about Vietnam so if they are eager to learn, I will try my best to share Vietnamese cultural quintessence with them.”

In 2020, Trang and her husband came back to Vietnam.

After ten years of living abroad, she was motivated to initiate something meaningful.

Observing that popular coffee chains use single-use plastic bottles, Trang along with her two close friends Nguyen Van Tho and Truong Thi Thuong opened an artistic coffee shop with all decorations, tables, and chairs made from recycled materials in District 2.

They assembled thousands of plastic bottles to build an insulation panel.

“There are 2,000 plastic bottles donated by our customers which symbolize 2,000 promises to reduce and recycle plastic for a greener Saigon,” she explained, referring to the former but still popular name of Ho Chi Minh City.

The café opened in December 2020 and has become a favorite haunt of art and recycling circles.

Trang frequently hosts workshops on environmental protection for children there.

She saves a small corner in her shop to exhibit books exclusively on Indochina.

"Therefore, I put books on Indochina, sewing techniques, arts, and even an old spinning machine for our guests to catch a brief glimpse of my city.”

During her tenure at the museum, Trang developed many activities to bring Vietnam closer to Georgian people, including workshops on Dong Ho paintings, Vietnamese weaving techniques, and cooking classes.

She also donated a traditional spinner and weaving loom to the museum.

There was a time when she wore ao dai to model for some 20 art students.

“They drew me in Vietnam’s traditional attire from different angles," she recounted.

"It took three months to finish those artworks.

"By modelling, I hoped to trigger their curiosity about Vietnam and bring good impressions about my motherland to international friends."