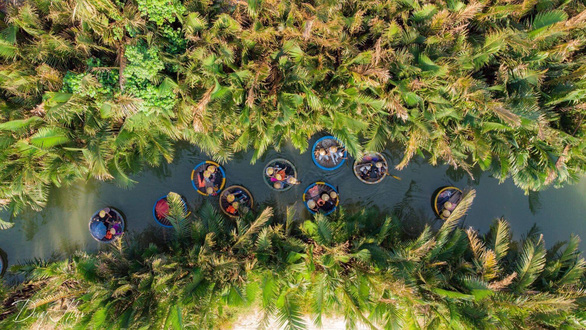 Basket boat tours a refreshing breeze in Vietnam’s Hoi An

“It’s only about 100 meters between the two river banks, but it sometimes seems unreachable,” Do Van Tien, a resident of Cam Thanh Commune, shared about the basket boat trips his village offers.

Tourists, he added, have to wait up to one hour before they can get onto a basket boat.

Hemispherical and woven from bamboo, the thung chai (basket boat) resembles a coracle – a small, circular boat traditionally used in parts of the British Isles as well as India, Iraq, and Tibet.

One of the can’t miss during a visit to Hoi An Ancient Town is a ride through lush coconut forests typical of southern provinces on these boats, which may not be readily recognized as vessels when lying unused on the shore.

As the ancient town is trying to get back on its track and lure back tourists after the pandemic, the ‘hub’ of basket boats at Bay Mau Coconut Forest is also teeming with commotion.

With the first seedlings fetched from the Mekong Delta some hundred years ago, the water coconut forest has long been considered a miniature replica of the southern region.

Idyllic and sparkling with ripples, the marshland proves a paradise for holidaymakers yearning for the great outdoors.

Just like other villagers, Tien dusted and gave new touches to his two coracles, which have been shelved during the pandemic to welcome back tourists as the Hoi An administration has recently kick-started the National Tourism Year.

Well tended to as if they were the residents’ homes, the boats are a treat for visitors’ eyes, their taste buds, and their fun buds.

One of the ‘first-generation’ basket boat service providers in Van Lang fishing village, Tien noticed a remarkable change in his neighborhood since tourism services were introduced.

In this coastal fishing area, Van Lang villagers have spent most of their lives carrying out fishing activities on seaworthy vessels armed with basket boats.

Now that many locals have made the switch from fishing or farming to offering basket boat tours or adopting the service as a side job since Bay Mau Coconut Forest was open to the public, they also have a better means of living.

The coracles now turn handy ferrying tourists and making their way through the luxuriant, fish-laden marshland.

Though the circular ‘floating object’ has no prow, steering wheel or parts to hamper water pressure, most riders find it much easier to maneuver the vessels through the creeks.

The surreal feeling as if they were floating on cloud nine with nothing beneath their feet is perhaps what captivates most tourists.

Seasoned riders such as Pham Ly catapult the job to an art by displaying dexterity in steering the unique boats.

The number of basket boats in Cam Lang Village has jumped from a mere 30 to nearly 1,200 over the past several years, according to the Cam Thanh Commune People’s Committee.

“Once we received a group of international tourists, but we could only mobilize around 30 basket boats from villagers to ferry them,” Tien recalled.

To the villagers’ surprise, the foreign vacationers were held spellbound while tour companies began to visualize new opportunities to tap the resources.

On the day Tuoi Tre (Youth) correspondents visited, Tien and Ly were getting 10 basket boats ready for a group of excursionists.

The rider, 63-year-old Le Thi Thoi, paddled rhythmically to a river section where some fishermen were casting their nets.

“Sea gusts grow powerful at this time of the year. It can wear on the rider,” Thoi explained to her passengers, adding it takes experience to navigate based on wind directions.

Thoi, with 50 years of experience in steering the coracles under her belt, and all of her children have switched from fishing to basket boat riding.

When basket boat tours became in vogue following a reality show featuring a Korean beauty queen, more tourists from South Asia have made their way here.

As tour operators and community-based villages began recruiting local riders, Thoi changed from steering basket boats to fetching fish from fishing boats and selling the catch at the local marketplace to ferrying tourists.

More villagers got onboard to supplement their incomes.

Before they knew it, after only a few years, the entire village had switched to steering basket boats for tourism services.

Thoi’s children are also known for their unique basket boat collections which come in different sizes and building styles from across Vietnam.

The number of basket boats is counted on household members, according to Thoi.

“My family of six own six boats. We change or upgrade them every few years for greater safety,” she said.

“The upgrade costs us a few million dong [VND1 million = US$44]. But it’s more labor-consuming."

The entire village has put on a facelift since their shift to tourism services, with new multi-floor houses mushrooming over recent years.

During the peak season from April to October in pre-pandemic years, all the households’ boats were overbooked, though the fleet had grown to more than 1,000 by then.

Gai and her peers have even celebrated several Tet (Lunar New Year) holidays, a special occasion for family gatherings, on their boats to be of service to tourists.

According to Ngo Hien Tran, vice-chairperson of the Cam Thanh Commune People’s Committee, the water coconut forests have long cushioned villagers from high sea waves from Cua Dai and nourished them with bountiful catches.

As soon as the forests were leveraged for tourism purposes, most residents have completely switched to steering basket boats and opening eateries.

“As tourism has recently picked up, villagers can get at least a few rides on bad days,” Tran said, adding those without boats can now earn stable incomes.

The commune is currently home to a fleet of nearly 1,200 basket boats for tourism.

She added Hoi An City plans to turn the ‘hub of basket boats’’ into river-based tourism villages and attract more tourists with diverse products including building houses from water coconut trees and making homegrown fish sauce.