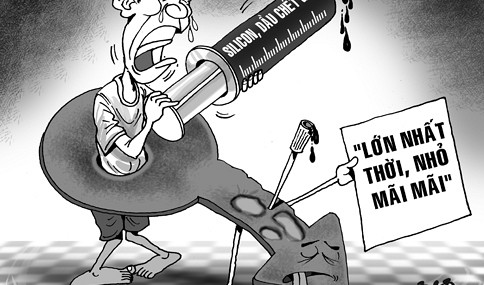 Within the past week, a hospital in Ho Chi Minh City has received five patients who were suffering from complications after they injected liquid silicon into their penises in an effort to enlarge them. These patients were suffering from edemas in their penises several months after the injections, leaving them unable to have sex, said Dr. Mai Ba Tien Dung, head of the Men’s Diseases Department at Binh Dan Hospital. A few of the men even saw their penises become deformed, Dr. Dung said.  The men, who are from southern Ca Mau Province, used silicon of unknown quality, and complications developed after about six months, Dr. Dung said. In previous years the hospital has treated only two-three such patients per year, but within the first half of this year, 10 men have already been hospitalized after injecting silicon into their penis, the doctor added. In order to treat these cases, doctors first remove the skin or tissue that is infected, and patients are then required to return three months later for penis regeneration. During that period, they will have difficulty urinating and cannot have sex, the doctor said.Warnings In a desire to enlarge their penis, a number of men have used liquid silicon, even though this substance is banned worldwide, as it has been proven to be unsafe. After being injected into the human body, silicon can cause reactions similar to a transplant rejection. When injected directly into blood vessels, liquid silicon can cause a pulmonary embolism, or even death, if the injection isn’t carried out correctly, Dr. Dung warned. With intensive treatment and care, penises with complications caused by silicon are usually recovered at a rate of 80 percent of size and form. Doctors only treat the damaged skin and soft tissues of the penis, and do not interfere with the seminal ducts or the testicles, so the reproductive ability of patients is not affected.