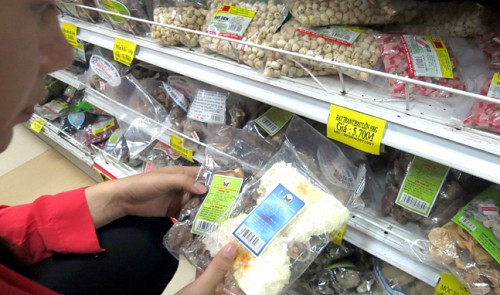 While many Vietnamese urban citizens have switched from shopping at traditional markets to supermarkets, the latter are gradually losing customer trust with several scandals regarding the quality of the goods sold at these more modern venues.

Small vendors at markets across Ho Chi Minh City have lamented that their businesses are suffering more and more as consumers are moving from the traditional shopping channel to the air-conditioned one.

“This is a matter of trust,” the vendors said at a festive event held for traders to celebrate the Lunar New Year in late January.

“Consumers have faith in the supermarkets, where reputable and trustworthy distributors sell their goods,” they explained.

Many consumers also say they prefer to shop at supermarkets, believing that these places are honest about the quality and origin of their merchandise.

For their part, the supermarkets always claim they have transparent policies to assure consumers of the quality of their goods.

All of this contributes to a gradual transition in which more market-goers are going to supermarkets, even though prices are often higher.

However, supermarkets have been hurt by recent scandals in which they had to refund their customers after selling poor quality products and items of dubious origin.

The questionable quality of goods sold at supermarkets has been in the headlines over the last year, making shoppers wonder who they can trust.

In one of the latest cases, many Chinese dried food products were found at supermarkets in the southern city with labels claiming they were of Vietnamese origin.

Dried edible mushrooms are for sale at supermarkets in the city at much higher prices than at small markets.

They bear Vietnamese labels, but the information on the labels only indicates that the products are packaged, rather than manufactured, by Vietnamese facilities.

Employees at one such facility confessed to Tuoi Tre reporters that these are Chinese products sourced from Binh Tay market in the city’s District 6, and that they are only packaged in Vietnam.

Once packaged with misleading Vietnamese labels, the Chinese products fetch much more money, some traders revealed.

In mid-March this year, a consumer reported to Tuoi Tre that the pork she had bought at a Big C supermarket branch in Go Vap District was infected with cysticerci, commonly known as pork measles.

The customer complained to the supermarket chain, which eventually admitted to the infection and gave her a refund.

In April 2013, Big C was also involved in a product origin scandal. One of its Hanoi outlets was found selling grapes that they claimed were grown in the central province of Ninh Thuan, while their labels bore Chinese flags.

When confronted with these scandals, supermarket representatives all protested that they are victims of dishonest distributors.

But they cannot dodge their responsibility to customers because they should have checked carefully before closing contracts with the suppliers, as well as examined the products before putting them on their shelves.

The relevant regulatory authorities should also be to blame for the issue, as they seemingly neglect checks on the quality and origin of products sold in supermarkets.

The market watchdog has conducted regular raids of markets, but no inspections have ever been done of the products at supermarkets.

The phenomenon arose following the construction work of a company

Officially, foreigners have always been able to visit the Nam Du Archipelago, a relatively unheralded set of islands off the southern coast of Vietnam. However, as discussed on one of the world’s most popular travel sites, getting there has not always been that easy