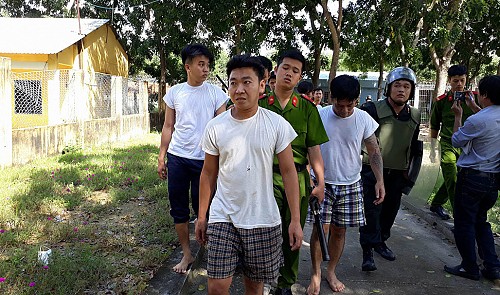 A rehabilitation center in the southern Vietnamese province of Ba Ria-Vung Tau is dealing with the aftermath of a riot which led to the escape of 200 drug addicts from the venue, the second event of this type to hit the country in the past month.

Hundreds of junkies at a rehab facility in Toc Tien Commune, Tan Thanh District, began stirring disorder on Wednesday morning hoping to put pressure on the center’s managers and create the opportunity for escape.

The rioters threw rocks at detention officers, forcing them to leave their patrol posts before the center’s patients were able to damage the facility’s brick wall and run away.

A total of 195 drug abusers freed themselves during the riot, 60 of whom were escorted back to the facility on the evening of the same day.

According to Le Thi Trang Dai, director of the provincial Department of Labor, War Invalids, and Social Affairs, the uprising was likely in response to two recent breakout situations at another rehab center in the southern province of Dong Nai.

Some 562 patients broke out of the Dong Nai rehab center on October 23, 80 of whom were still missing, while another mass-breakout occurred at the facility last Sunday enabling 163 junkies to flee.

Thanks to the prompt response from competent authorities, the situation was quickly put under control, Dai added.

Some of the rioters were probed the same day and will be sternly punished for their incitement, as per the law, said Colonel Le Toi Sung, director of the Ba Ria-Vung Tau Department of Police.

A probe by Tuoi Tre (Youth) newspaper showed that the center was home to 877 addicts, of whom 65 were women, though the building was only designed for 600 to 650 people.

Director Dai conceded that the situation was partly a response to a lack of infrastructure, human resources, policies, and professionalism in the management of drug abusers.

Managers and detention officers at the facility should be thoroughly trained and equipped with the necessary skills to cope with all possible scenarios, she continued.