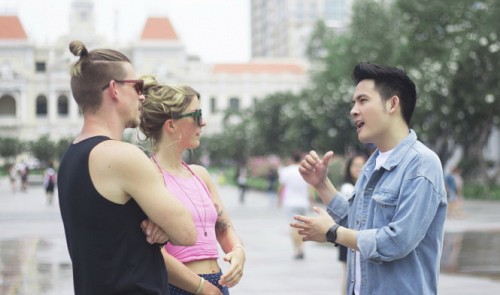 A Vietnamese YouTuber has become somewhat of a sensation after his videos capturing foreigners’ reactions to youth-oriented topics have been shared multiple times on social media.

Hoang Minh Tuan is the founder of Chantube, the 21,786 subscribed YouTube channel where Tuan has been uploading his reaction, prank and experimental videos.

In his clips, Tuan goes out onto the street, meets foreigners and asks for their reactions to certain topics.

The most-watched video is the one featuring the reactions of foreigners to Vietnamese pop star Son Tung M-TP‘s music video for 'Lac Troi.'

The video has been viewed more than 4.2 million times on YouTube.

The Buon Ma Thuot resident has been praised not only for being a pioneer of the reaction video genre in Vietnam, but also for his fluent English and the youth-oriented topics he chooses.

“Those clips are not only interesting but can also help me improve my English, as well as learn how foreigners think about stories related to young people in Vietnam,” viewer Le Hang commented.

One of the reasons Tuan created Chantube is his experience of working in tourism in Hanoi.

After witnessing foreigners being ripped off or experiencing ‘misunderstandings’ because of cultural differences, the young man said he wants to do something about it.

“I want to be a ‘young ambassador’ and promote Vietnamese culture and cuisine,” he said.

When he began, Tuan hired a cameraman and film editor to help him with the videos, but has since decided to do everything on his own due to the cost involved.

“I tried to learn those things from the Internet,” Tuan recalled.

Those were just the first obstacles however. Tuan has also put a lot of effort into practicing his English so that he can interview people fluently.

English is not his mother tongue, so forgetting the script or mispronouncing a word is unavoidable at times.

“I would have to do the first clips I made over and over,” he said laughing. “I thought it would be easy.”

Sharing his story with Tuoi Tre (Youth) Newspaper, Tuan said he had taught himself English via newspapers and social media.

The 26-year-old also spent time visiting parks in the city’s downtown area to meet and talk with tourists so that he could practice his speaking and listening skills. Practice makes perfect, he says.

In addition to his skill of interviewing foreigners and making successful videos, many of which have now been viewed millions of times, Tuan has a background in music and has performed in a movie. In the future, he is planning to learn another foreign language and intends to make more meaningful videos.

The Chantube creator will attend the WebTVAsia 2017 awards ceremony in Taiwan this November, after winning a nationwide video-making contest.

Moreover, Tuan has applied for the Ship for Southeast Asian and Japanese Youth Program (SSEAYP) 2017 where he would love to have the opportunity to promote Vietnamese culture to more international friends.