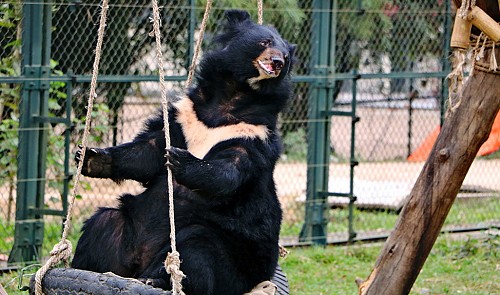 Two moon bears at a sanctuary in northern Vietnam were given orthognathic surgeries by a Hong Kong-based veterinarian invited by Animals Asia.

The bears, Zebedee and Murko were rescued from captivity where their bile was being extracted for medicinal purposes and are now living at a sanctuary in Tam Dao National Park, about 85 kilometers northwest of Hanoi.

Zebedee has been a ‘regular’ patient of doctors at the sanctuary due to the serious injuries and deformities he has developed over the 15 years he spent in captivity before being rescued by animal welfare charity Animals Asia in 2009.

For those 15 years, the captive bear spent his time living in a cramped cage in the corner of a dim kitchen where his bile was constantly being extracted.

Upon rescuing Zebedee, vets had no choice but to pull out most of the bear’s teeth to protect him from serious cavities and remove his gallbladder due to irreversible damage from multiple bile extractions.

Zebedee’s face was also deformed from the violent beatings he received after attempting to escape from captivity, making eating a pain for the bear.

Food crumbs and other small objects had accumulated inside Zebedee’s nasal cavity due to his deformity, leaving him susceptible to bacterial infections, such as pneumonia or bronchitis.

Dr. Cahalane is a board-certified specialist and pioneer in animal orthognathic surgery.

Commenting on the outcomes of Zebedee’s surgery, Dr. Cahalane said it turned out even better than she had expected, as the tissues inside Zebedee’s mouth were healthy enough to withstand the surgery.

According to the vet, it will be a few more weeks until the tissue completely heals. Until then, the bear will be fed soft food that requires little chewing.

Zebedee would also have to refrain from violent play, otherwise he’ll risk breaking the medical suture.

The total costs of medicines, tools, and transportation of specialized medical equipment from abroad for the surgery were estimated to be close to US$2,000.

The sum is fully funded by donations from two UK philanthropists who had signed up to be guardians of the bear.

Zebedee’s friend Murko also underwent a similar surgery to fix its broken nasal cavity due to a complication resulting from an earlier teeth removal.

Animals Asia has rescued almost 600 bears, including 177 in Vietnam, according to local newswire VnExpress.

Most of the rescued animals, it reported, were confined to small cages and regularly had their bile extracted for use in traditional medicine.

Those numbers have since dwindled to around 1,000 as bears are either rescued or died, according to Animals Asia.