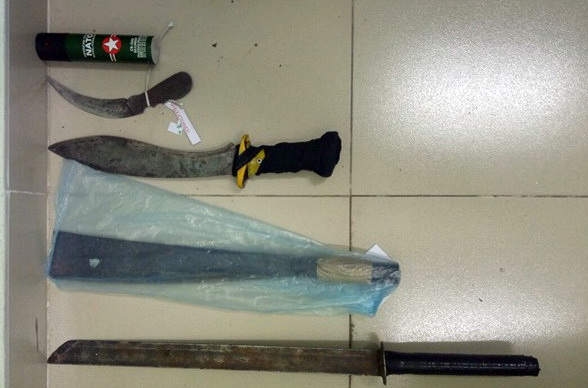 Police in the southern Vietnamese province of Binh Duong have arrested six gang members who had carried out 15 robberies within the past month.

The suspects, who had wielded machetes and used pepper spray to rob their victims, were apprehended by police officers in Thuan An Town, Binh Duong Province on Saturday.

According to preliminary information, commuters traveling along a section of National Highway 13 from Thuan An Town to Thu Duc District, Ho Chi Minh City submitted several reports in late September, stating that they had been mugged by the group.

Aside from motorcycles, the gang members pulled over passenger buses and threaten people onboard with their machetes, forcing the victims to give them money and other valuable items.

The situation caused immense concern among the local community.

Following an investigation, officers from the Thuan An police department ambushed and arrested the suspects.

At the police station, the gang members admitted to committing 15 robberies within the past month to collect money for drinking.

Officers in Thuan An Town have called on victims to make reports of their cases and assist the investigation.

Last month, police in Ho Chi Minh City captured four members of a criminal gang who had carried out approximately 30 robberies in August and September.

They committed over 20 robberies in Ho Chi Minh City and 10 others in other southern localities, namely Long An, Tien Giang, Ben Tre, Binh Duong, Dong Nai, and Vung Tau.