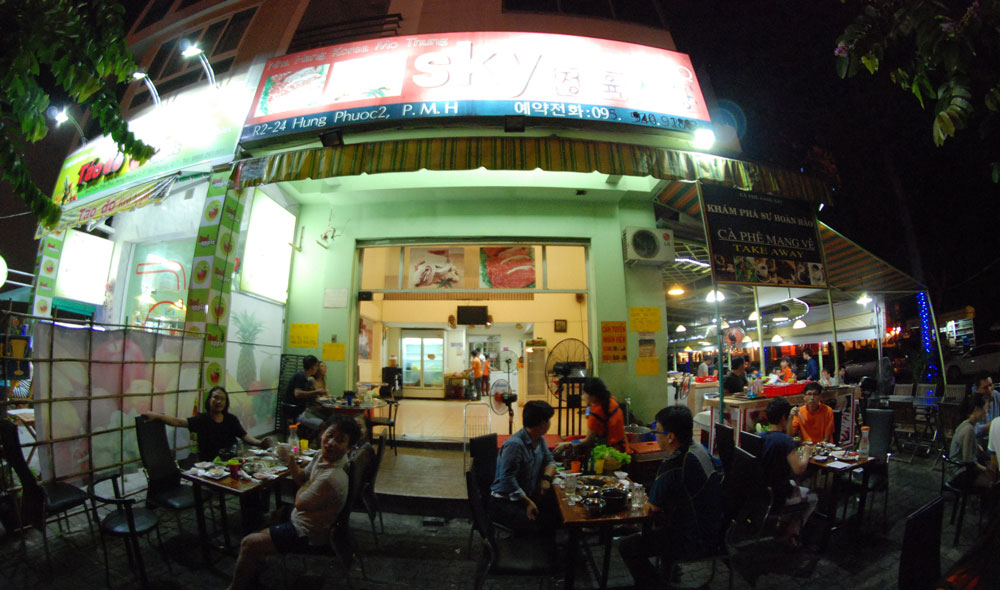 Nowadays, many young Vietnamese greet each other with “Annyeong-haseyo,” instead of saying “hi or hello,” as they did before. The Korean greeting is just one of the signs that Korean culture now has a strong influence on Vietnam society. The most specific example of this influence is the large Korean community that is growing in Ho Chi Minh City.

The South Korean consulate says its citizens began flocking to HCMC and its neighboring localities prior to 1992, when Vietnam and South Korea established official diplomatic relations.

The consulate said the Korean community in Vietnam comprises up to 100,000 people, making it the fourth largest Korean diaspora in the world, after those in the United States, Japan, and China. There are about 70,000 to 80,000 Korean expats living in southern Vietnam, mostly in HCMC.

But, in recent years, more and more Korean nationals have moved to Phu My Hung in District 7, making it the largest Korea town in the city with an estimated population of up to 20,000, according to the consulate.

Korean cuisine is truly part of the allure in the area. There is a world of dishes to try, such as Kimbab (Korean-style sushi), Bibimbap (mixed rice), fried chicken, barbecue, Tteokbokki rice cake, and traditional beef soup.

Taekwondo centers, Yoga clubs, and Protestant churches also have been set up to serve the Korean enclave. However, bars and nightclubs are rarely seen in the neighborhood.

A Vietnamese security guard at a local Korean restaurant, who wishes to be anonymous, revealed that Korean expats often gather in night clubs or bars built in the basements of buildings in Phu My Hung.

The Phu My Hung area also supports a private school for the Korean community, where the main language is Korean. Moreover, there is a weekly printed newspaper called “The Vietnam – Korea Times,” jointly established by South Korean lawyer Kim Jong Gak and Vietnam News Agency.

Published every Tuesday, The Vietnam – Korea Times, headquartered on Pham Thai Buong Street in Tan Phong Ward, is aimed at providing the Korean community and companies with in-depth information about Vietnam in all fields such as politics, diplomatic ties, economy, culture, education, art, history, and tourism.

Seventy percent of the newspaper’s content is provided by Vietnam News Agency while the rest is contributed by South Korean experts and writers.

Seung Hee, a Korean student at RMIT university in Phu My Hung, is one of four contributors who has helped translate Vietnamese news content into Korean for almost one year. Seung, 20, told Tuoi Tre she is proud of contributing to the growth of the newspaper, although sometimes she finds it difficult or time-consuming to translate some economic and law terms.

The Korea town in Phu My Hung is primarily a Korean business district with densely-packed restaurants, hotels, grocery stores, and hair salons.

Most Korean expats in the area do not speak Vietnamese nor English.

Nevertheless, in general, Koreans in Phu My Hung say they are satisfied with their lives because of the cheap living costs and nice weather in Vietnam. Favorable business opportunities also lure many Koreans to the area.

Among them is Lee Hun, who left Gangnam District in Seoul for HCMC three years ago. Lee said it is not easy at all to make a living in Korea these days because of the fierce competition in all business sectors.

He decided to settle in Phu My Hung and opened his own beauty salon, Mr. Hun Hair, located in the pedestrian area of the Sky Garden 3 apartment building, because there is a large Korean community there.

Lee boasted that his 8-year-old son, who is studying at the Korean school, can speak Vietnamese and Korean. Sometimes, Lee hangs out with Vietnamese friends for a drink or goes to Vietnamese restaurants downtown. His favorite Vietnamese food is bun bo Hue (spicy beef noodles from the central Vietnamese city of Hue).

The 46-year-old said he spends 30 minutes every day studying Vietnamese in order to become friends with locals, as well as to learn more about Vietnamese culture. Lee said that he will get married to a local woman next year.

Woo Sang Ho, owner of Sky Barbecue restaurant in Phu My Hung at the intersection of Pham Van Nghi and Cao Trieu Phat Streets, told Tuoi Tre that he and his wife had planned to settle abroad in a Southeast Asian country like the Philippines, Indonesia, or Vietnam because their barbecue restaurant encountered many difficulties in South Korea.

The couple eventually chose to live in Vietnam after Woo’s younger brother, who is running a traditional Korean medicine shop in Phu My Hung, introduced them to the country.

“There is a large Korean community here so we are not really worried about language barriers or cultural differences. We were also told that Vietnamese people like eating Korean-style barbecue so we decided to open a barbecue restaurant in Phu My Hung,” Woo said, bragging that 80 percent of his customers are Vietnamese.

“We are happy that our business generates much profit,” he said.

Many Vietnamese staff in Sky barbecue restaurant said Woo has a deep love for Vietnamese orphans. The Korean man donates food, pork, washing powder, candies and cakes to children at an orphanage in Long Hoa pagoda in District 7.

“It’s very hard to earn money for a living in Korea now, ” Woo said. "But our business in Vietnam runs quite good so I want to contribute part of my profit to helping poor Vietnamese children.”

Jeon was a florist in Incheon city in northwestern Korea. But because her husband is working as an engineer in Vietnam, she and her two daughters followed him to the country in 2006. Jeon said before coming to Vietnam, all she had known was that it is a country with many motorcycles and rivers.

Jeon and her husband, Richard Kwon, opened a shop selling flowers and special Vietnamese products in Phu My Hung in 2011, and 80 percent of their clients are Korean.

“We are very happy to live in Vietnam. After living here for a long time, we would say we are 50 percent Vietnamese,” Kwon said with a smile. "We will live here forever."