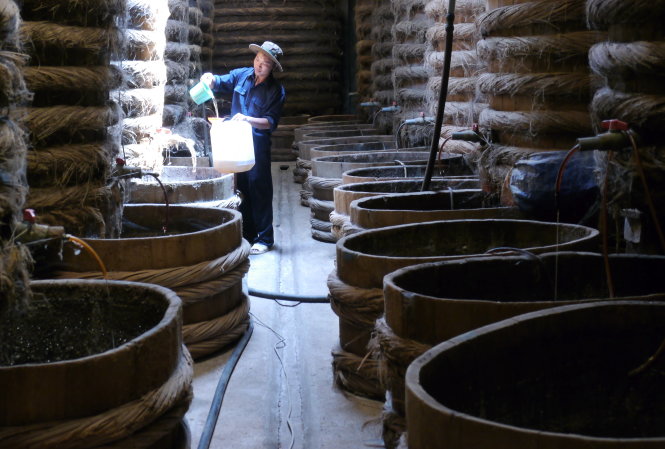 Vietnamese fish sauce associations are planning to call on police to investigate a recent survey that allegedly serves to help a manufacturer secure market advantages by publishing misleading findings about the condiment’s arsenic content.

The Ministry of Public Security should launch an investigation into a fish sauce quality survey released by the Vietnam Standards and Consumers Association (Vinastas) earlier this week, according to fish sauce manufacturing associations in Kien Giang, Binh Thuan, and Hai Phong.

These localities, along with the south-central city of Nha Trang, are some of Vietnam’s traditional fish sauce making hubs.

According to Vinastas, 67.33 percent of the 150 fish sauce samples tested in the survey contained more than the maximum allowable arsenic content of 1mg per liter.

As arsenic is a metalloid, local consumers were immediately mislead into believing that fish sauce products are toxic and that the Vietnamese condiment, used in almost every meal, is dangerous.

The survey was immediately met with criticism that Vinastas deliberately interpreted its test results in a vague and misleading way.

While arsenic exists in both organic and inorganic forms, only the latter is toxic.

Vinastas chose to use the generic term ‘arsenic’ in its survey results, failing to note the differences between the two forms and striking false fears into the minds of the public.

Only under media questioning did Vinastas deputy general secretary Vuong Ngoc Tuan make it clear that the excessive amount of arsenic found in the survey samples are all organic and safe for consumption.

Despite excessive content, as the arsenic is in its organic form, Vietnamese fish sauce is safe, Tuan admitted in an interview with Tuoi Tre (Youth) newspaper.

The controversy has left both experts and the public wondering if Vinastas had any ‘special motivation’ to conduct the fish sauce survey and focus on arsenic content in its results.

Organic arsenic is found in fish, seawater and seaweed, and any fish sauce traditionally made through the fermentation of fish with sea salt will contain the chemical.

Several fish sauce associations and businesses gathered for a meeting on Thursday and unanimously agreed to lodge a complaint to Prime Minister Nguyen Xuan Phuc, calling on him to investigate the issue and aid traditional fish sauce makers affected by the misleading information.

“We will call on the premier to hold those behind the false information responsible for its adverse affects on the traditional fish sauce making industry,” Nguyen Thi Hong Minh, former deputy head of the erstwhile ministry of fisheries, said after the meeting with the fish sauce associations.

The complaint is scheduled to be submitted to the premier by early next week, Minh added.

Nguyen Huy Tien, deputy chairman of the Phan Thiet Fish Sauce Association, said those that spread the misleading information should be properly sanctioned.

“We do not know if there is a company behind Vinastas [in conducting this survey], but proper penalties must be carried out for spreading this false information,” Tien said.

Turning back on traditional fish sauce

Traditional fish sauce makers did not have to wait for too long to see the Vinastas survey results take a toll on their business.

Many businesses complained at yesterday’s meeting that supermarkets and retailers have ceased sourcing their products, and some consumers even sought returns and refunds on their purchases.

Tien, the Phan Thiet Fish Sauce Association deputy chairman, admitted the official damage statistics are not yet available, but “it cannot be denied that the vague arsenic information is negatively affecting the industry.”

“Many people immediately ‘arsenic’ with toxic chemicals.  They are unaware of its organic and inorganic forms,” Thanh said.

“They do not realize that the arsenic in fish sauce is in its organic form and is non-toxic.”