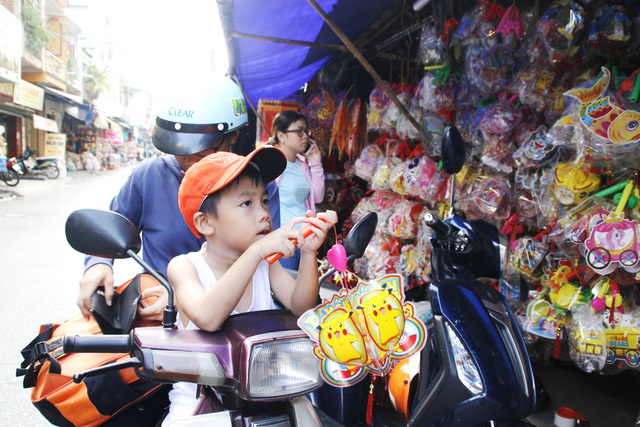 While the Mid-Autumn Festival market in Ho Chi Minh City is typically inundated with cheap Chinese lanterns, this year’s market is alive with a wide array of locally-made products.

Producers from Ho Chi Minh City have breathed new life into traditional lanterns while launching new plastic, battery-powered models to win over children and their parents during the upcoming Mid-Autumn Festival.

They have also made it a point to improve the lanterns’ quality while cutting prices to avoid competition from Chinese rivals.

The Mid-Autumn Festival is observed annually on the 15th day of the eighth month in the lunar calendar. This year, it falls on October 4.

Traditionally, all family members will gather at night to sip fragrant tea, enjoy mooncakes, and cherish the full moon, while children play with their lanterns.

As usual, the Phu Binh lantern alley in District 11 is full of commotion in the month leading up to the festival.

With orders from around the country flooding in, richly colored lanterns are hung throughout the alley, and packages awaiting delivery are stacked high.

According to lantern making households in the district, traditional items have been in strong demand so far this year thanks to the variety of lanterns on offer.

Traditional lanterns come in a wide variety of shapes – including fruit, star, and animal – as well as sizes and colors, and also use eco- and human-friendly materials.

They are mostly made from bamboo frames and cellophane, and lit with candles placed inside.

This year plastic, battery-operated toys which can also emit music and light have proved popular.

A representative of the Anh Thi lantern making facility in Phu Binh revealed that for the first time this year they have produced more than 40 varieties of the plastic, two-piece lanterns shaped as animals and cartoon characters familiar to children, including Pikachu.

Meanwhile, staff members at a nearby shop have their hands full filling bulk orders from schools and charity clubs who will send them as gifts to needy kids in other provinces.

Minh, who runs a lantern factory in Phu Binh, disclosed that schools continue to favor traditional items for their students.

Large orders from them have helped businesses like hers survive against the inundation of cheap, poorly made plastic Chinese toys.

The shop has also purchased Chinese-style modern lanterns produced by local companies and sold them to multiple clients.

Over the past few years, with the exception of traditional lanterns, local companies have churned out an increasing number of plastic, battery-run lanterns to compete with Chinese manufacturers.

Another owner of a traditional lantern manufacturer confirmed that they were doing a stable business thanks to bulk orders but were forced to offer discounts of up to 10 percent, with prices ranging from VND10,000 ($0.4) to 150,000 ($6.5) apiece.

The facility planned to produce 600-700 traditional lanterns of various kinds this year, up by around 10 percent on the same period last year, with wholesale items accounting for approximately 90 percent.

Meanwhile, shops along Luong Nhu Hoc Street in District 5, considered an iconic destination during Mid-Autumn Festival for years, had warehouses full of stock though they had yet to display many toys for sale.

According to a shop owner on the street, Chinese products, mostly in the shape of robots and animals, continued to flood the market this year.

Despite coming in shapes similar to those of Chinese origin, Vietnamese plastic items lack diversity compared to the thousands of models available from China.

“Though Vietnamese products fetch almost the same price as their Chinese counterparts, consumers’ ability to get their hands on good products is sheer luck,” the store owner noted.

Likewise, Gia Long Fine Arts Co. has launched a host of Kibu products made of cellophane and sponge.

The new combination is designed to make the toys sturdier and more durable.

Children can also disassemble and reassemble the lanterns with ease, honing their soft skills at play.

Thai Binh Duong Co., based in the south-central province of Khanh Hoa, has also introduced its own princess lantern collection of around 100 models for children to choose from.

The company debuted its three-dimensional robot collection, alongside hundreds of more traditional models.

This year’s favorites remain educational toys in the shapes of animals and alphabet letters, according to production facilities throughout Ho Chi Minh City.

They advised parents to make their purchases at reliable shops and bookstores and read the instructions carefully to ensure the lanterns are suitable for their child’s age group.