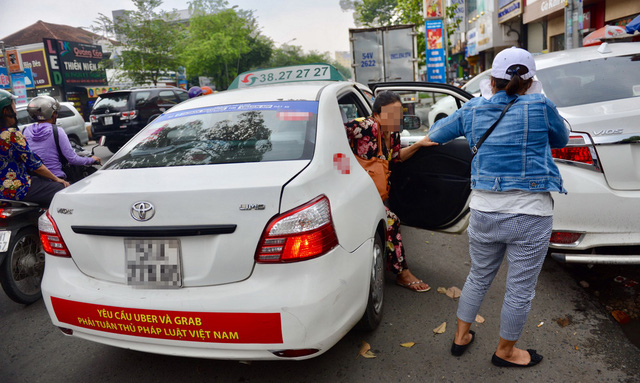 While some Vietnamese taxi operators have demanded that ride-hailing apps such as Grab and Uber be subject to the same rigorous regulations as conventional cabs, experts have suggested that the solution be the other way round – loosening the current stringent rules on taxis.

Uber and Grab are reportedly enjoying several advantages when compared to their conventional rivals, allowing them to offer cheaper fares and win over passengers.

Some experts believe that it would be better to free traditional taxicabs from their current strict regulations, than to apply the same rules on the app-based services.

While Grab and Uber cars are currently treated as family vehicles in terms of the regulatory framework, a car must meet as many as 13 different requirements, such as having a badge, logo, black box and meter system, in order to run as a legitimate taxi service.

Since the beginning of last year, all taxis must also be equipped with a receipt-printing device and have been placed under the management and oversight of a number of agencies, from the local administration and transport department to tax and registry authorities.

“We have to follow all of these regulations to ensure our business is in line with the law,” a director of one taxi firm said.

A taxi operator must make a detailed report whenever they wish to increase their fares, and have to set aside money to have their taximeters reset and certified, while the ride-hailing apps can freely decide their fares, according to another expert.

“This is obviously unreasonable, but no regulatory agency has ever admitted to this weakness and decided to make a change,” he added.

Associate Professor Tu Sy Sua, from the Ho Chi Minh City University of Transport, suggested that instead of demanding that regulations on Grab and Uber be tightened to ensure fairness, taxi companies should ask to have their requirements loosened.

“The requirements for conventional taxis should be reviewed and anything unreasonable or no longer relevant should be changed,” Sua recommended.

One of the requirements that should be removed, he suggested, is one that stipulates taxi firms must declare their fares, especially given the constant change in fuel prices.

“One cab operator had to spend as much as VND800 million (US$35,242) to re-register all of its meters following a fare adjustment,” one expert said.