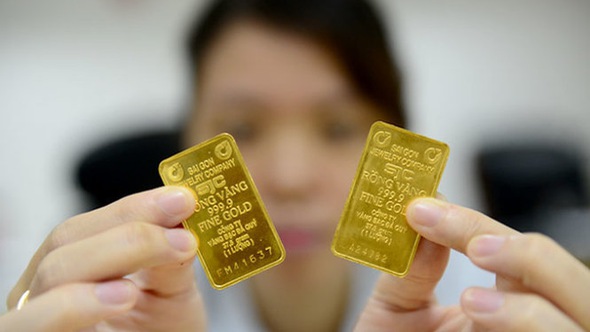 The State Bank of Vietnam, the country’s central bank, likes to be the only entity authorized to accept savings in gold bullion and conduct transactions on gold trading floors.

A draft amendment to the government’s decree No. 24 on the oversight of gold-based businesses is currently in the feedback stage.

According to the decree, the State Bank of Vietnam already monopolizes the production of gold bullion and the importation and exportation of raw gold material.

The proposed amendment would allow the bank to further monopolize the country’s gold by making it the only institution authorized to accept gold savings from organizations and individuals and trading the precious material on gold exchanges.

This means such activities conducted by any other entities would be deemed illegal.

Many Vietnamese consider gold and U.S. dollars a safe haven from inflation and other uncertainties in the current economy, whereas the State Bank of Vietnam has been focusing its efforts on increasing public trust in the stability of the Vietnamese dong.

Those efforts included the November 2012 circular No. 12 banning banks in Vietnam from accepting savings in gold bullion.

The ban was part of a wider drive to curb gold hoarding and stabilize foreign exchange rates and gold prices in order to prevent serious losses by individual investors and banks.

The circular stipulates that banks should refrain from seeking savings in the form of gold bars and paying interest on gold deposits from members of the public.

Instead, banks are permitted to offer a ‘gold keeping service,’ which charges customers a fee to keep the precious metal in their safe.

The ‘gold keeping fee,' though sometimes as low as 0.05 percent of the gold’s value per year, makes the service unattractive to gold bullion holders.

In January 2013, the central bank took one step further by enacting a plan to eliminate gold from the economy by raising the qualifications needed for institutions eligible to trade gold bullion.

While there had been 12,000 gold shops across the country, only 22 banks and 16 shops and companies were able to obtain the new permit under the government’s stricter requirements.

Gold owners in Vietnam have since been restricted to buying and selling only at licensed establishments.

Unlicensed facilities can be fined as much as VND500 million (US$22,026) if they are caught trading gold.

It is estimated that some 500 metric tons of gold is possessed by the Vietnamese public as personal savings – an amount that would be a huge boost to the economy if it entered circulation.

The central bank is making an attempt to encourage citizens to open gold savings accounts and convert the precious metal into U.S. dollars for the nation's economic development.

In 2016 the Vietnam Gold Traders Association proposed establishing a national gold trading exchange, through which the government could offer ‘certificates of gold bullion deposits’ or gold bonds to make use of the huge ‘gold reserves’ in the public, but the idea has never been realized.

The latest proposal from the central bank could be translated as one solution to make the best use of the gold currently held as personal savings by Vietnamese.

“As I understand it, the government will begin ‘mobilizing’ gold from the public through the proposed amendment,” Thu Nguyet, a Ho Chi Minh City resident, told Tuoi Tre (Youth) newspaper.

However, Nguyet added that she still has many questions that need clarifying by the central bank.

“Will the government pay interest for my gold savings? Should I deposit my gold at commercial banks or the State Bank of Vietnam?” she elaborated.

Nguyet made no secret that she is saving in both Vietnamese dong and gold.

“After banks ceased accepting gold savings, I had to keep the gold at home. I’m in constant worry,” she admitted.

Quoc Vu, another Ho Chi Minh City resident, is concerned about the way the central bank plans to encourage people to send their gold to the state.

One of the possible methods, Vu said, is that people will give away their physical gold in exchange for a so-called ‘certificate of gold deposit.’

“So when we want to withdraw the deposit, will we be paid in gold or will the savings be converted into the dong?” he questioned.

Experts are concerned, too

Economic expert Tran Thanh Hai says it will not be easy for the central bank to implement the plan, if approved.

“The central bank does not have a wide enough network of branches and transaction offices, and the counting and checking tasks of gold deposits would also be complicated,” he elaborated.

Hai wondered if the State Bank of Vietnam would have enough resources to do all these things, suggesting that it would be better if commercial banks, with their existing networks and resources, be given the job.

The pundit added that the plan might backfire and push the public into a frenzy to stock the precious metal again if the central bank accepts gold savings with attractive interest rates.

“On the other hand, if the central bank sets the interest rate at zero percent or lower, meaning people have to pay a ‘gold keeping fee,’ will anyone ever give their gold to the government?” he questioned.

Associate Professor and Doctor Nguyen Khac Quoc Bao, dean of finance of the University of Economics Ho Chi Minh City, said the public needs more transparency as to what the government will do with their gold.