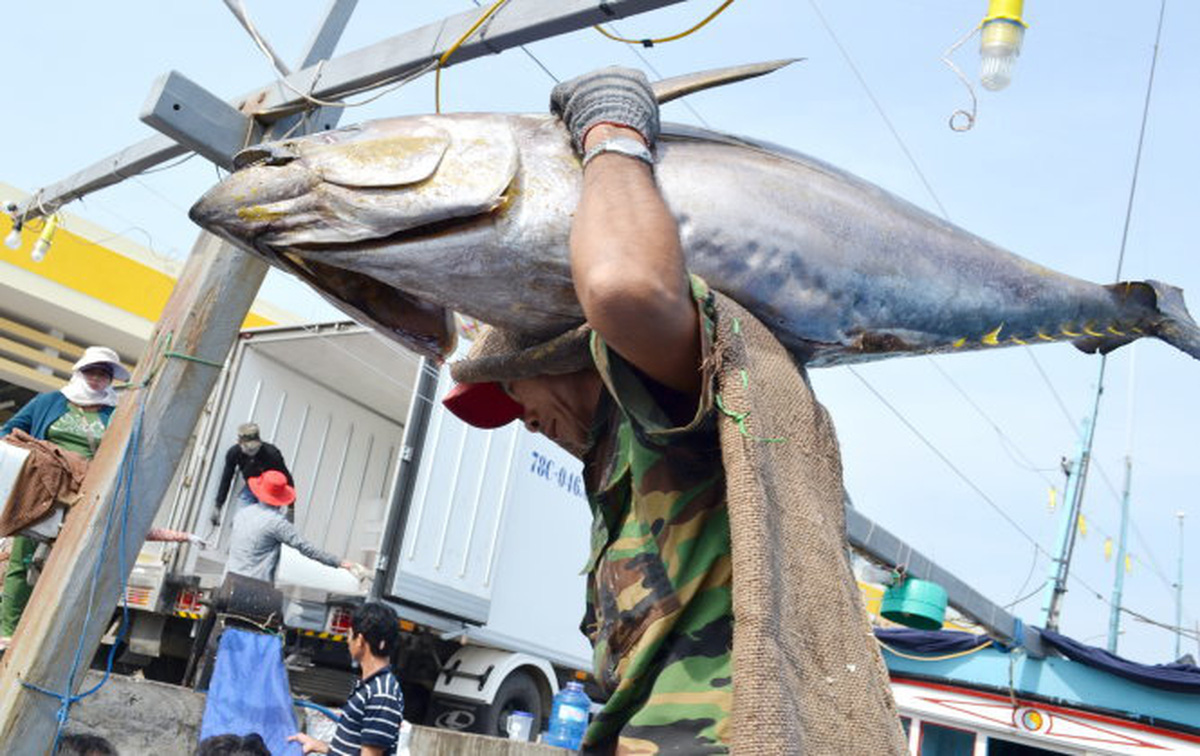 Despite the European Commission having given Vietnam’s seafood industry a ‘yellow card’ in October - a warning to countries involved in illegal fishing - Vietnamese seafood exporters believe they can have the decision revoked, and avoid a more serious ‘red card.’

While seafood exporters try to help themselves, the whole industry, from the national seafood association to provincial authorities, are also working to improve the situation.

All of them are working against the clock, as it has been two months into the six-month window Vietnam is given to fix its seafood export issues.

What is a yellow card?

The ‘yellow card’ is a warning given by the European Commission to any “non-cooperating country” in its fight against illegal, unreported and unregulated (IUU) fishing worldwide.

The warning to Vietnam was based on the country “not doing enough to fight illegal fishing.”

“Furthermore, Vietnam has an inadequate system of control over fish that are processed locally before being exported to international markets, including the EU,” the commission said.

After the six-month period of the ‘yellow card,’ if significant progress is made, the ‘yellow card’ will be lifted, and replaced with a ‘green card,’ representing legal export status.

If not, a ‘red card’ will be given, meaning that Vietnam will be banned from exporting its seafood to the European Union.

The EU currently accounts for 16-17 percent of Vietnam’s seafood exports, making it a market Vietnam can’t afford to lose.

Cao Thi Kim Lan, general manager of Bidifisho, a local seafood firm, has warned that any ‘red card,’ if enforced, may lead to other large importers, including the U.S. and Japan, turning their back on Vietnamese seafood.

Nguyen Thi Thu Sac, chairman of the seafood committee under the Vietnam Association of Seafood Exporters and Producers (VASEP), said the business community is well aware of the challenge they face, and are actively cooperating with authorities to solve the problem together.

One practical solution is to ‘say no’ to catches from illegal or unlicensed fishing boats, those that use banned equipment or illegal methods for their catches and those that fail to prove the origin of their products, Sac said.

“We also need to say no to rare and precious aquatic species, and seafood that is undersize,” she added.

Nearly 80 seafood exporters have signed up to join the VASEP campaign, and the association has also set up websites, in both English and Vietnamese, to publicize their efforts in having the ‘yellow card’ lifted.

Coimex, a seafood exporter based in the southern coastal city of Vung Tau, sells 40 percent of its domestically sourced products to the EU, earning $10 million in annual revenue.

The company’s operations are yet to be impacted by the ‘yellow card,’ but chairman Le Van Khang is concerned that a ‘red card’ is inevitable if no improvements are made.

“A red card means Vietnamese seafood will be banned from entering the EU,” he said. “What will be the fate of my hundreds of employees then?”

Tran Van Dung, general director of Baseafood, said that in the immediate term, the company would protect itself by putting more focus on the origin of the products it sources.

During the six-month ‘yellow card’ period, the country will have 100 percent of its shipments to the EU held for inspection before clearing customs.

“If we fail to carefully check the origin of our products, we will face export turnarounds by the EU immediately,” he said.

The EU makes up 30 percent of the export turnover of Baseafood, earning it some $10 million a year.

Khang, the chairman of Coimex, said businesses trying to ‘rescue’ themselves is one thing, but authorities should also do their part.

It is not impossible to stop Vietnamese fishermen from engaging in illegal fishing if local authorities and relevant authorities get more serious in their management.

“The EU warned Vietnam before it actually handed out the ‘yellow card,’ but we still let it happen,” he said.

“The problem can only be properly resolved if top officials in each province take responsibility.”

Nguyen Hoai Nam, deputy general secretary of VASEP, put the emphasis on building a workable database of seafood’s origin, as recommended by the EU.

Vietnam currently has 28 coastal provinces and cities, each of which has their own database of fishing activity.

“The business community hopes that these databases are well developed and can be connected to the national database, so it will be easy to check fishing registrations and trace seafood origin,” Nam said.

While it’s the fishermen themselves who undertake the illegal activities, some say it’s not a deliberate act to violate other countries’ sovereign waters.

In September 2017, Do Thanh Dat, from the south-central province of Binh Dinh, was captaining a boat with 11 fishermen aboard in Vietnam’s Truong Sa (Spartly) archipelago, when the sea turned rough. The location’s deep water prevented Dat from anchoring and strong winds blew them into Brunei waters before they could act.

“Brunei forces captured us quickly and penalized us for violating their fishing waters,” Dat recalled.

The captain was sentenced to ten months behind bars, while the crew members each served one month and paid cash fines, he added.

Dat said fishermen have been told not to go fishing in the waters of other countries, but this is easier said than done.

“When you are in the middle of the sea, you can’t tell each country’s waters apart,” he said.

Many Vietnamese fishing boats are not equipped with devices to identify the overlapping maritime territories and fishermen end up violate foreign waters unknowingly.

Vietnamese fishermen acknowledge that the EU’s ‘yellow card’ is not something that only seafood exporters should lose sleep over.

“If the EU stops importing seafood from Vietnam, fishermen will be impacted as they will be left with no choice but to sell their catches to China at a cheaper price,” Nguyen Van Manh, a fisherman from Vung Tau with 45 years of experience, said.

Nguyen Van Thu, from the central province of Quang Ngai, has been arrested for illegally fishing in both Australia and Palau.

“I have signed a written guarantee not to violate foreign waters,” he said.

In fact, Thu said he had built a new boat and will now “fish nowhere but in Vietnamese waters.”

Nguyen Tan Hai, another Quang Ngai fishing boat captain who has served jail time in New Caledonia, signed a similar guarantee and promised himself and local authorities “not to repeat such a mistake”.