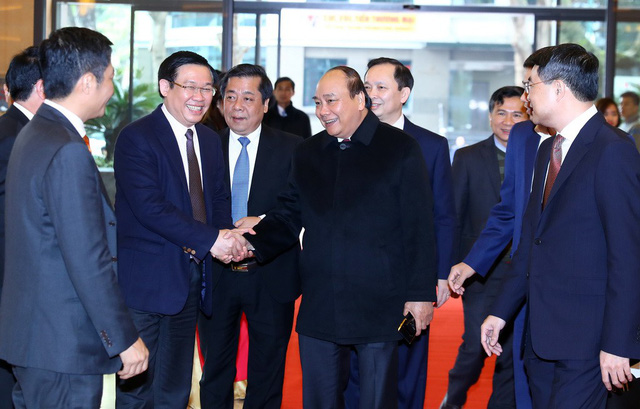 Vietnam’s banking sector should seek measures to regulate cryptocurrency and other digital assets, and mitigate the ‘dark side’ of technological advances, Prime Minister Nguyen Xuan Phuc requested on Tuesday.

During these times of fast technological development, local banks should put those tasks on top oftheir agenda, in addition to continuously cutting lending interest, controlling inflation and resolving bad debts, the premier said during a meeting to kick-start the banking sector’s 2018 action plan in Hanoi.

“The Fourth Industrial Revolution has brought about new issues such as cryptocurrency, which in turn creates new challenges for monetary policymakers, so the banking sector should proactively address these problems,” PM Phuc underlined.

He recommended that the banking sector should soon develop a set of measures to regulate bitcoin, a digital currency that uses cryptography for security, and other electronic currencies and assets.

“Banks should also boost the development of modern applications to catch up with the Fourth Industrial Revolution and ensure security, limit risks that come along with technology,” the PM added.

In October 2017, the State Bank of Vietnam outlawed cryptocurrency as a means of payment, while the amended Vietnamese Penal Code, taking effect on January 1, also criminalizes the issuance, supply and usage of cryptocurrency.

At Tuesday’s meeting, the prime minister also hailed the banking sector for their joint effort in several impressive economic performances Vietnam made last year, including a 3.53 percent inflation rate, which came out much lower than targeted, a record of US$53 in billion foreign reserves and a decade-high 6.8 percent GDP growth rate.

“The macroeconomic stability and economic growth that exceeds targets indicate a significant contribution of the banking sector and illustrate that [our] monetary policies were a success,” the PM underlined.

The annual lending interest rate in Vietnam was cut by 0.5 to 1 percent last year, reducing the cost pressures for businesses that had to borrow loans for production, but “banks should also consider cutting the rate by 0.5 percent this year for the public and national interests,” PM Phuc said.

The prime minister also pointed out several shortcomings of the banking system, including risks in lending to such fields as real estate, stocks and build-transfer-operate infrastructure projects, which may lead to nonperforming loans, or bad debts.

PM Phuc thus requested that the banking sector should go on with keeping the foreign exchange rate stable, controlling the consumer price index at four percent and maintaining credit growth at 18 to 20 percent in 2018.

“Banks should continue to keep a watchful eye on credits given to risky sectors and resolve bad debts,” he said.

“We have learned costly lessons from previous wrongdoings, and I believe without adequate supervision, we will repeat the mistakes in 2018.”