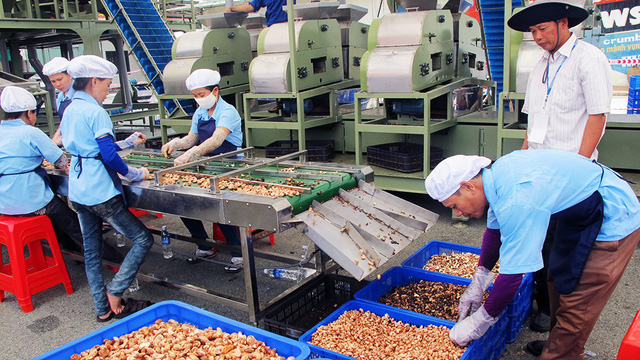 Vietnam’s cashew industry has invested in 500,000 hectares of plantations in Cambodia with the vision of turning its southwestern neighbor into a major supplier.

The Vietnam Cashew Association (Vinacas) has pledged to provide technical support to Cambodian farm owners to reach a yearly yield of one million metric tons of raw cashew nuts by the end of 2028.

According to Vinacas, as of 2017 Vietnam was the world’s No.1 processor and exporter of cashew nuts, a position it has held for the last 12 consecutive years.

However, local cashew nut processors rely heavily on raw materials imported from African countries, which have demanded a high price.

Ho Ngoc Cam, director of a Ho Chi Minh City-based agricultural exporter, said the price of imported raw cashew nuts from Africa had risen from $1,000 per ton to $2,200-2,300 per ton over the past three or four years.

“Some Vietnamese businesses have remained in operation only to provide job security for their workers, as they make little to no profit based on the current price of raw imported cashews,” Cam said.

Shipments from Africa can also take up to 40 days to reach Vietnam, at a cost of $70-80 per ton, further increasing costs of local cashew processors.

Shipments from Cambodia will cost a little more than $10 per ton, according to Vietnamese businesses.

Vinacas president Nguyen Duc Thanh forecasts Vietnam’s cashew processing capacity to reach two million tons per year, with domestic production accounting for less than a fifth of that demand, at 300,000-350,000 tons a year.

Cooperation with Cambodian producers to supply raw materials to Vietnamese processing companies is a profitable business model for both sides, Thanh asserted.

Vietnam’s long-term goal would be to turn Cambodia into its top supplier of the nut rather than Africa, he added.

At a meeting with Vinacas last December, Hean Vann Horn, head of Cambodia’s General Department of Agriculture, expressed his confidence that the country was more than capable of growing over 500,000 hectares of cashew.

Prior to 2014, only 30 percent of Cambodia’s raw cashew nuts were exported to Vietnam, the Cambodian official said, but that figure had grown to 98 percent as of today.

Thanh dismissed the idea that Cambodia could one day surpass Vietnam as a major cashew exporter, citing the Vietnamese businesses' use of modern technology to produce top-quality products.

“Our competitors are China and India. Cambodia and African countries are our partners,” he asserted.