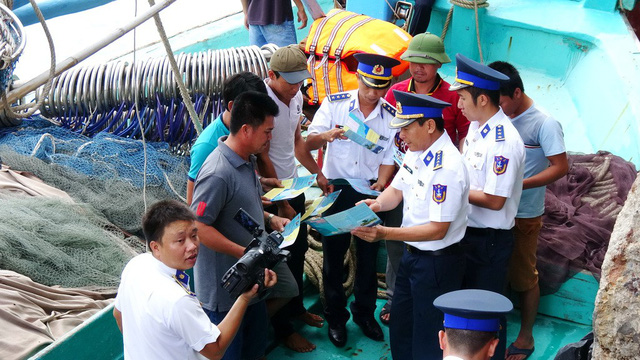 The Vietnamese agency assigned to the oversight of the food industry has been implementing various stringent measures in an effort to have the ‘yellow card’ by the European Commission (EC) rescinded.

The ‘yellow card’ corresponds with a warning issued by the EC to any country refusing to cooperate in the international fight against illegal, unreported and unregulated fishing.

Vietnam received card in October 2017, which stipulates that after a six-month period, if the country can enable considerable progress in grappling with illegal fishing, the sanction will be lifted, and a ‘green card’ – an eligible status for export – will take its place; otherwise, a ‘red card,’ a total ban, will be enforced.

Vietnam’s Ministry of Agriculture and Rural Development and provincial authorities have been striving for the removal scheduled for April 2018, Ha Cong Tuan, the body’s deputy minister, said on March 2.

A number of coastal areas have equipped themselves with offshore fishing boats and preemptively taken actions against illegal fishing in the waters of neighboring countries.

In Quang Ngai Province, located in central Vietnam, those boats found with a repeat of forbidden fishing are indefinitely prohibited from operations, according to Tran Ngoc Cang, chairman of the local People’s Committee.

The owners of two boats coded QNg 90518 and QNg 90945, for instance, have forfeited the right to be granted loans for their profession and to carry out fish-catching activities for good.

In addition, before fishing boats depart from docks, coastal police require their owners and captains to sign a commitment document against illegal fishing.

In Ba Ria-Vung Tau Province, in southern Vietnam, the local Department of Agriculture and Rural Development has formulated an action plan to stop fishers from continuing catching fish in foreign waters, according to Tran Van Cuong, director of the body.

“The program was designed in accordance with the [said] ministry’s guidelines and will be presented to the provincial People’s Committee for approval over the next few days,” Cuong said on March 2.

He added that since October 2017 the spirit of this effort has also been seen in an official order from the committee, thwarting any attempts by Vietnamese boats to fish outside the nation’s maritime areas.

Punitive measures accordingly include rendering invalid from six to twelve months the fishing licenses of boats transgressing the national sea borders for the first time, and revoking the fish-catching right permanently for ships with a recurrence of illegal fishing.

The Vung Tau administration has also required fishing boats with large power machines to be retrofitted with cameras and stay connected around the clock with relevant authorities on land.

Boats which belong to that type but fail to feature the devices are not granted or ineligible to renew operation licenses, Cuong, the director, said.