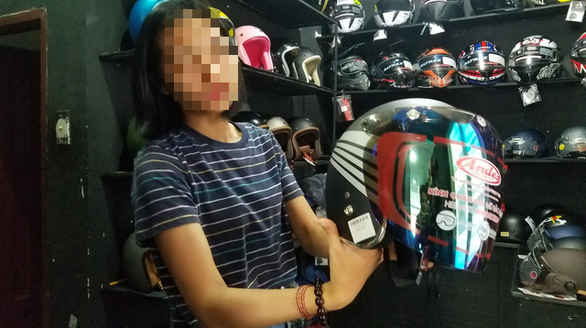 With temperatures near all-time highs in southern Vietnam, goods marketed to help beat the heat and protect from harmful UV exposure are flying off the shelves in Ho Chi Minh City.

While the World Health Organization classifies a UV Index of 11 as creating ‘extreme risk of harm from direct sun exposure’ and being capable of burning skin and eyes in just ten minutes, the index in the southern Vietnamese metropolis is currently pushing 12.

To combat the dangers of prolonged UV exposure, local residents have made sheltering themselves from the scorching sun a top priority, spending VND500,000-1,500,000 (US$21.5-64.5) at a time on items like coats, gloves, masks, UV-blocking helmets, and sunscreen in order to stay safe while outside.

Tran Thi Thanh Kim Cuc, the manager of a shop which specializes in clothing and accessories for motorbike commuters in Tan Binh District said she’s nearly doubled her sales of sunlight-protection coats over the last month.

Likewise, the representative of a store in Binh Thanh District which specializes in importing Japanese products designed to protect against UV exposure told Tuoi Tre (Youth) newspaper that the shop’s new arrivals are swiped up immediately by customers.

“Customers that want to buy our products sometimes have to wait days for new arrivals,” the representative said.

However, consumers are spoilt for choice with dozens of protection options available.  And alongside choice comes issues with authenticity and unscrupulous sellers.

Minh, a resident in Binh Thanh District, told Tuoi Tre that she fears she got ripped off while to buy an anti-UV coat.

According to those familiar with the business, most sunscreen and UV-protection products sold in Vietnam are ‘hand-carried’ from overseas and a significant percentage are copycats of well-known brands.

Moreover, although the use of well-made products can protect against the harmful effects of sun exposure, the UV-blocking indicators of these products are quite vague and have not been certified by reputable organizations, according to doctor Le Duc Tho at City International Hospital in Binh Tan District.

Tho advised that consumers look for genuine goods from brands that have already established representative offices and system stores in Vietnam.

Meanwhile, a dermatologist in Ho Chi Minh City who asked for anonymity told Tuoi Tre that fabric and sunscreen cannot completely prevent skin from being exposed to UV rays.

“People should refrain from going outside between 10:00 am and 4:00 pm,” the dermatologist advised.

Southern Vietnam, including Ho Chi Minh City, is in the transition between the dry and rainy seasons, according to Le Dinh Quyet, an official from the southern hydro-meteorological station.

It is expected to remain sunny on Friday, but showers and thunderstorms are forecast for the evening. The weather pattern will continue over the upcoming days, Quyet continued, adding that highs will still hover between 35 and 36 degrees Celsius.

This year’s rainy season will begin in the first half of May in southern Vietnam, a bit later compared than usual, the weather pundit added. He also forecast that it will end in November.