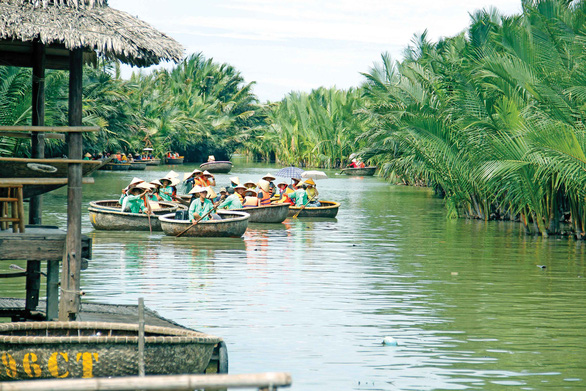 A project to develop a waterway route connecting two of central Vietnam’s most well known tourist cities is expected to begin later this year when the Co Co River is returned to local authorities after two years of being exploited for sand.

Private entities have been dredging sand from the Co Co River in Quang Nam Province since 2017, but exploitation on the waterway is scheduled to end when licensing agreements between the province and several private companies end in August.

Co Co river is a 20 kilometer long link between Hoi An, a tourist city in Quang Nam Province and Da Nang, a major economic and tourist hub in central Vietnam.

According to Quang Nam chairman Le Tri Thanh, for the past two years, the provincial administration has been granting licenses to several urban developers in order to carry construction projects by the river.

Those licensing agreements also included permission to dredge sand from the bottom of the Co Co River.

When those dredging activities are discontinued in late August, Da Nang and Quang Nam are expected to grant permission for boat tours and tourism activities along the Co Co.

“This is a great opportunity to design ecological river tours along the Co Co because the scenery on both of its banks is beautiful,” Tran Van Khoa, managing director of Jack Tran Tours Co, said.

Opening the river route will not only add a new major tourist attraction for the two cities to share, but is also expected to help combat several environmental issues plaguing the region, including stagnant waters, flooding, and water salinity.

“I believe in the potential of the Co Co River,” Thanh, the Quang Nam chairman, said.

“There aren’t many rivers located so near to beaches and world-class resorts like it is.”

Quang Nam authorities have plans to develop three stops along Co Co: one at the Cam Thanh Coconut Village and another at the Tra Que Vegetable Village, both located in Hoi An, and a final stop in Dien Duong Commune in Dien Ban District.

According to Khoa of Jack Tran Tours, the stop in Tra Que Vegetable Village will allow visitors to try their hand at farming while also being near enough to visit world-quality golf courses in Hoi An.

Once the visitors reach Da Nang, they can either rest at a boat station near the foot of Kim Son Mountain, one of the famous Marble Mountains, or at K20, a local historical relic site.

But works to turn Co Co into a key tourist destination of the area won’t start until this year-end.

As part of the project, some 150,000 cubic meters of sand will be dredged from a 100-meter section of the driver, according to Nguyen Anh Tuan, deputy director of the agency in charge of managing agriculture and rural development projects in Da Nang.

The dredging project and plans to develop tourism facilities along the river are expected to carry a VND1 trillion (US$43 million) price tag.

At a meeting in April, Da Nang and Hoi An authorities agreed to work together on projects related to realizing the plan in order to officially open the Co Co River for tourism by September 2020.