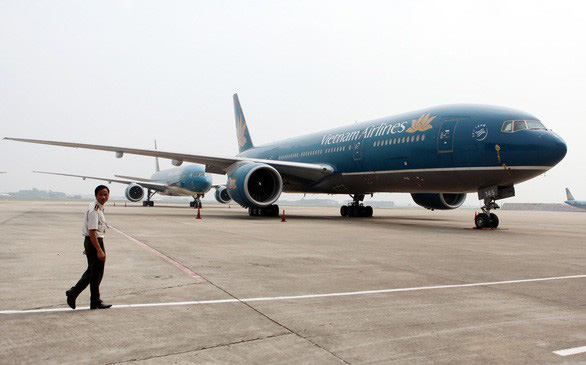 National carrier Vietnam Airlines has asked the Vietnamese government — its majority owner — to provide a low-interest loan of up to VND12 trillion (US$515 million) to support its recovery after the novel coronavirus disease (COVID-19) pandemic.

Tran Thanh Hien, chief financial officer at Vietnam Airlines, told the press on Friday the financial support would demonstrate the responsibly to the airline of the government, which owns an 86-percent stake in the carrier.

The carrier is seeking an emergency loan of between VND4 trillion ($171.68 million) and VND12 trillion, which it will pay back in three years.

The loan shall be provided at the lowest possible interest rate and come with a government guarantee, Hien suggested.

It also seeks permission to issue shares to existing shareholders to increase capital. The scale of the issuance is to be in balance with the loan plan.

In the medium and long term, the government should guarantee the airline’s issuance of ten-year bonds worth VND10 trillion ($430 million) to expand its fleet for the 2021-25 period, the officer added.

The global slowdown due to the COVID-19 outbreak is expected to halve the potential revenue the global aviation industry expected for 2020 to $419 billion, the International Air Transport Association (IATA) said this week.

IATA says airlines worldwide need an infusion of $200-250 billion in direct grants, loans and loan guarantees, as well as tax rebates and a temporary waiver of ticket taxes and other government-imposed fees to support their recovery.

Most airlines have burned through their cash reserves as of the end of May 2020, Hien said.

Vietnam Airlines had collected VND8.8 trillion ($377.69 million) in air tickets revenue by mid-February, but the amount was halved by the end of March as passengers sought refunds on canceled trips because of the pandemic, the CFO explained.

No airline was prepared for a crisis that would cause its revenue to drop by 95 percent and capacity to be reduced to 2-5 percent, Hien stressed.

The airline’s fleet of over 100 aircraft is still incurring monthly expenses estimated at VND2.1 trillion ($90.13 million) even as the planes are grounded.

Jetstar Pacific, a low-cost airline majority-owned by Vietnam Airlines, reported a 64-percent capacity reduction and VND1 trillion ($43 million) in losses in the first half of 2020.