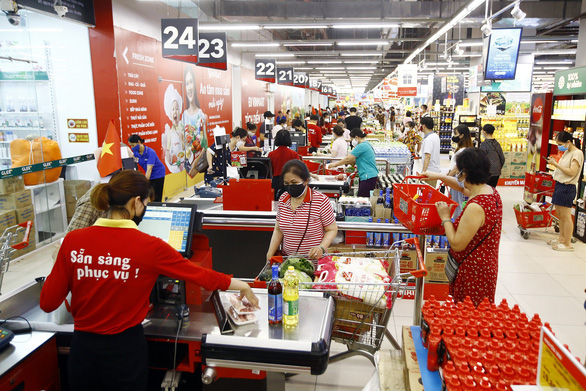 As the COVID-19 continues ravaging Vietnam, Masan is focused on maintaining its production levels and supply chain amidst health concerns and safety restrictions so that customers can have continued access to the goods they need to survive these trying times.

Keeping up with demand

In the first half of 2021, Masan refitted 40 percent of the shelving in 62 VinMart+ mini-supermarkets in Hanoi and Ho Chi Minh City to hold fresh produce – a move the company says will help it better meet the needs of its customers during the pandemic.

Additionally, to ensure the flow of goods during the pandemic, Masan has asked the central government and local authorities to allow it to create a ‘buffer zone’ of schools, warehouses, stadiums, and gymnasiums around its factories where the company’s workers can stay in order to minimize their interactions with the community and, thereby, minimize the risk of infection.

Food, finances, and coffee under one roof

Masan has also been experimenting with a ‘store-in-store’ concept over the past several months that has involved opening take-away kiosks operated by Phuc Long – a popular Vietnamese café brand – in 41 of its VinMart+ stores. Currently, Masan has its sights set on launching over 1,000 of such kiosks this year.

Outside of food, Masan’s VinMart+ stores are focused on following a Convenient Life (CVLife) model that includes a partnership with local lender Techcombank to offer money transfers, cash withdrawals and deposits, open accounts, apply for credit cards, and register for e-banking services.

Many of these new integrated services are coupled with benefits and loyalty point systems for customers. During the opening of Masan’s first CVLife store in Hanoi, for example, customers who paid with Techcombank debit cards received discounts of 50 percent, up to VND99,000 ($4.34), on their VinMart+ and Phuc Long bills.

Increasing number of VinMart+ stores to 3,001

Masan’s plans for 2021 include increasing the number of its VinMart+ stores to 3,000 in order to meet consumer demand for fresh food, branded consumer goods, and other services. In addition to modern retail channels, VinMart+ stores and VinMart supermarkets also act as distribution points for the company’s online orders.

Since signing an agreement with a consortium led by Alibaba Group and Baring Private Equity Asia in May, Masan has been actively promoting VinMart’s online sales through cooperative agreements with e-commerce platform Lazada, tripling its online sales in June 2021 against the previous month.

By comparison, online sales accounted for less than one percent of VinMart’s turnover in the first quarter of 2021. That number rose to a whopping 6.8 percent of total sales in June.

At four VinMart supermarkets in Ho Chi Minh City, online sales made up more than 10 percent of revenue.

Just six months after launching on Lazada, the platform now occupies 0.5 percent of VinCommerce’s revenue. Every day, 1,300 of VinCommerce’s nearly 3,000 online orders are placed through Lazada.

To remove bottlenecks, VinCommerce is building distribution centers staffed by professionally trained employees capable of fulfilling its growing number of online orders, with a goal of processing 10,000 online orders each day by December this year.

Credit Suisse Group lifted MSN’s target price to VND162,000 ($7.1) per share in its report published on August 10, based on the revision of its forecast for Masan’s earnings per share (EPS) for 2021 by 57 percent compared to the previous estimation.

In its report on August 16, VCSC continued to recommend buying MSN. VCSC set MSN's target price at VND172,000 per share, 28.8 percent higher than the market price and 21 percent higher than the target price of VND142,500 ($6.25) per share recommended in its previous report. VCSC affirmed its optimistic view that MSN will continue to capture Vietnam’s long-term consumption growth as the conglomerate owns leading large-scale consumer businesses in FMCG, branded meat, and retail essentials.

BVSC also issued an outperform recommendation for MSN with a target price of VND160,000 ($7.02) per share. BVSC believed that Masan Consumer Holdings is reaping success from the strategy of ‘premiumizing’ and diversifying FMCG products while making them convenient for consumers, who are more focused on health and safety issues and looking for quality convenience products to use at home despite temporarily cutting down on spending.