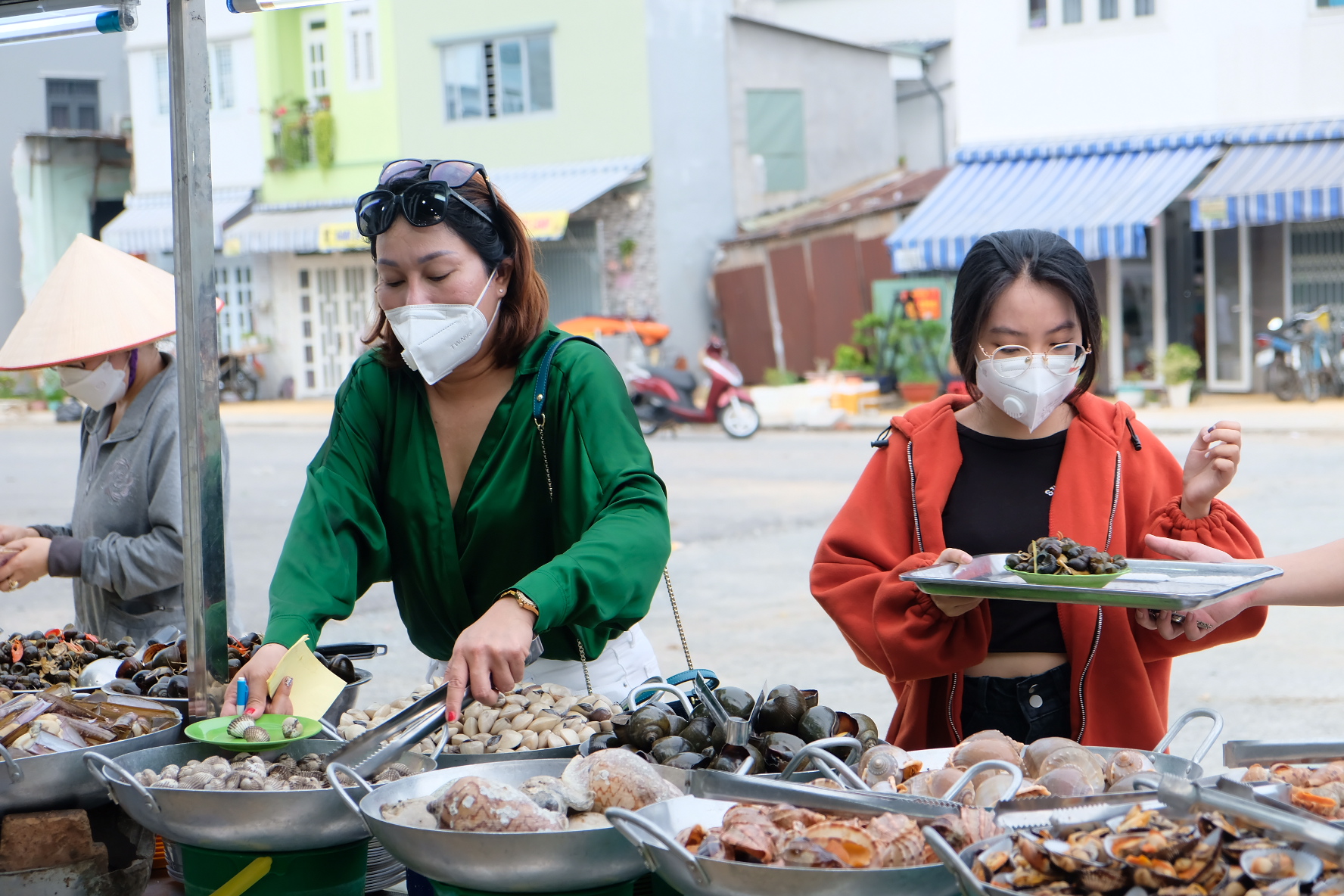 Food and beverage stalls and restaurants in Ho Chi Minh City are still grappling to get their grooves back, as customer demand shows few signs of recovery amid an ongoing COVID-19 outbreak even though a ban on sit-down services was already lifted in October.

On October 28, Ho Chi Minh City allowed sit-down food and beverage services to reopen after nearly five months of suspension due to the COVID-19 pandemic, according to a decision of the municipal administration.

These businesses were given the green light to resume takeout services on September 8, when daily cases in the city were dropping and the fourth COVID-19 wave, which started in late April and has killed nearly 17,000 people in the southern metropolis to date, began to get under control.

However, food and drink sellers still feel like they are walking on thin ice.

On Sunday afternoon, Nguyen Thi Thuy Linh, owner of a stall specializing in shellfish dishes in Binh Thanh District, welcomed back sit-in customers for the first time in months.

Despite a reopening approval, she remained “cautious about a pandemic” and decided to stay low for a few more days.

“Now that I have more confidence, I decided to pick a good day and reopen my shop," Linh said.

“I hope the business goes smoothly and brings me optimism after a bout of grimness.”

On her first day of relaunch, Linh said she only stocked half the amount of the seafood that she used to buy before.

This is a trial run to measure customer demand, Linh said, adding that her food is transported fresh from Phan Thiet, a coastal city about 200km east of Ho Chi Minh City, and may go to waste if not sold in time.

“Many stalls had just been erected when the COVID-19 mandate hit, leaving them in the red and driving them to permanent closures,” she said.

“I was lucky enough to have been able to maintain cash flows and make a return.”

In the meantime, a roadside eatery selling congee, alcohol, and accompanying food in Thu Duc City under Ho Chi Minh City, owned by Nguyen Duy Tung, has been welcoming back customers for three weeks.

“Sales were sporadic and inconsistent while footfall has significantly decreased,” Tung complained.

As the city still requires all food stalls to close by 9:00 pm every day, Tung has to deny service to patrons who arrive later than 8:30 pm, fearing that they may overstay and subject the owner to administrative fines.

“We used to stay open late at night, or as long as our customers still wanted service,” Tung recalled.

The city’s regulation also requires local food stalls to fill no more than 50 percent of their normal seating capacity, which has taken a toll on their sales.

“My main source of income is not from congee — it's rather from alcohol and side dishes that customers order in long sits,” Tung revealed.

“Our revenue only amounted to 40 percent of pre-outbreak figures, which is barely enough to pay for employees’ salaries and rent.”

After months of eating at home to avoid COVID-19 infection, some Ho Chi Minh City residents say they are still skeptical about the safety level of sit-in dining.

“I ate out a lot with friends prior to the fourth wave but we have to refrain from gathering in large groups at the moment,” said Tu Anh, a 26-year-old customer at a shellfish restaurant in Ho Chi Minh City.

After the resumption of sit-down services, Anh has only dined out three times so far.

“The majority of customers at the moment are male, while women, children, and the elders are rarely seen," said Ngan, an employee of a seafood shop on Pham Van Dong Street in Thu Duc City.

“People also avoid going in groups due to the looming pandemic."

According to Nguyen Huu Tri, owner of a banh mi and milk tea shop in District 7, his sales have recovered up to 50 percent of pre-outbreak numbers, but the majority of purchases are takeaways and orders from food delivery applications.

As witnessed by Tuoi Tre (Youth) newspaper correspondents, various food services have resumed operations in Ho Chi Minh City in early November, but a considerable proportion of them have switched to grocery selling to cope with current adversities.

Ho Chi Minh City has been the largest epicenter in Vietnam since the fourth virus wave began on April 27, with over 438,219 local infections and nearly 17,000 deaths.

Health authorities have administered more than 13.6 million vaccine doses, with over 5.84 million out of nine million people in the city fully inoculated.