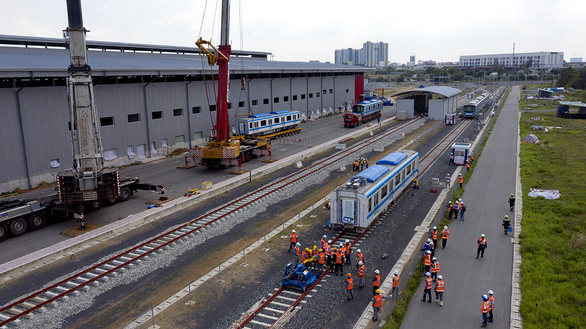 Ho Chi Minh City Urban Railways No. 1 Company Limited (HURC 1) is at risk of suspending operations due to not having received funding since August last year.

In its recent report to the Government Office, HURC 1, which was established seven years ago to receive, manage, operate, and maintain the city’s Metro Line No. 1, said it has been unable to pay its staff since February of this year.

The lack of funding has also prevented HURC 1 from paying social insurance premiums for its employees since July.

Established in 2015 as a state-owned enterprise under the management of the Ho Chi Minh City administration, HURC 1 was granted a charter capital of VND14 billion (US$601,000).

HURC 1 has earned no revenue during its lifetime as Metro Line No. 1 has yet to be completed, forcing the company to maintain operations by using advances from its charter capital.

It has yet to be issued expenditures for operations.

However, HURC 1 has been unable to receive any advances from its depleted charter capital since August 2021 and could be forced to suspend operations due to a lack of funding, according to HURC 1’s report.

Metro Line No. 1 was previously slated to be put into commercial operation in 2018, but its progress has been delayed several times, the company said.

To cope with HURC 1’s financial problem, the municipal People’s Committee has proposed that the central government, the Ministry of Finance, and the Ministry of Planning and Investment allow the city to advance a state budget grant to the company while it awaits revenue from commercial operations.

The proposal was based on the company's establishment project, under which the state budget will cover expenses on its operations while it operates without revenue.

The Government Office has asked the two ministries to consider resolving this issue and ask for instructions from the prime minister if needed.

The finance ministry has suggested that the municipal administration ask the government to increase HURC 1’s charter capital, while the Ministry of Planning and Investment asked that the city consider using the state budget or other appropriate sources to finance the company’s operations to the extent permitted by law.

As the two ministries issued their different guidelines, the city has yet to establish how it will fund HURC 1, according to the report.

“The implementation of the solutions suggested by both ministries would be time-consuming and the need for funding is very urgent,” HURC 1 noted.

While awaiting a feasible solution from the ministries, HURC 1 proposed that the prime minister consider giving a state budget advance to the company so that it can maintain operations.

The metro project, which started in August 2012, has a total investment of VND43.7 trillion (US$1.87 billion), most of which has come from Japan’s official development assistance (ODA).

The project had been slated to be completed in the fourth quarter of 2021 after several delays, but due to the impact of COVID-19, the completion date has been rescheduled to the last quarter of 2023.

Currently, 91 percent of the metro project is complete, HURC 1 said.

It runs from Ben Thanh Market in District 1 to Suoi Tien Theme Park in Thu Duc City, with three underground stations and 11 stops above the ground.

Upon operation, the line is expected to run 300 trains per day, with a total of 930 passengers per train.