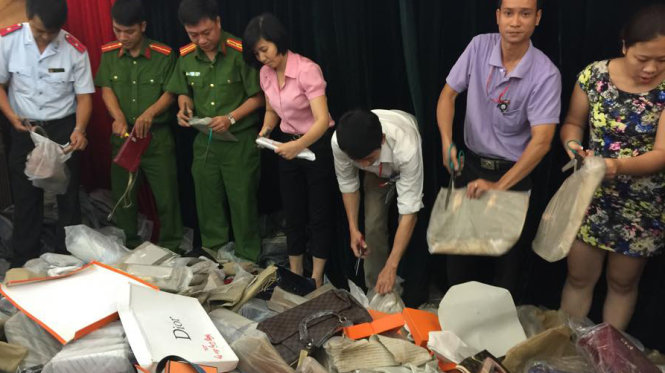 ​So many fake things in Vietnam

I have this theory that fakeness is contagious. And Vietnam is suffering a pandemic. There’s a cure that involves smacking people around the head with a wet ‘banh mi,’ unfortunately however, a vaccine involving human trials with something less painful is decades away.

Although I (and many expats) have been aware of this since our first week of living in Vietnam when you buy a phone charger only to find it lasts exactly 33 days, on the dot, each time, the exasperation never ends. The recent headlines regarding the selling of fakely branded scarves highlight the need for expats to be forever on guard against the fakeness that creeps stealthy into our cozy expat lives.

Personally, I was deeply offended by the incident because it undermines the efforts of the genuinely honest, hardworking Vietnamese businesses struggling to sell and export their products while dealing with the government’s ‘Alice in Wonderland’ bureaucracy, international export compliance laws and the uphill battle to build Vietnam’s reputation for creating decent products for the local and global markets.

The scale of the problem is far greater than most people imagine: people producing and selling fake A92 gasoline, VN Pharma accused of importing fake cancer medicine, fake taxi licenses and drivers, fake art (that was in Hoi An…), fake government dog collectors, fake cops, fake cobra wine, and Da Lat comes in for a special mention as dishonest traders disguise Chinese fruits and veggies as Da Lat produce. I just hope their prison cells are not fake either.

Electrical products deserve a noteworthy category of evilness just for themselves and the sellers should be sentenced to a year’s hard labor as a sugarcane seller. I once bought a laptop locally from a shop that’s part of one of the biggest chains in the country only to discover that the Windows software was pirated. Yes, I did replace the software and Microsoft can sleep easy now.

Another magnificent product I procured was a power board labeled as an American product that caught fire in my kitchen ten minutes after I installed it. Generally, I don’t expect them to catch fire until I’m away on holiday.

Phone chargers are a laugh too – labeled as prominent international brands, most of these break down after sixty days. And why buy a real iPhone when you can get that swishy looking one with the fake glass that breaks the minute you put it down on the table? I’d buy one but I’ve got an indestructible ancient Nokia and semi-indestructible Samsung.

As I mostly eat out at reputable restaurants and pay out a little bit more for the real thing, I don’t have to think too much about fake food, however, food safety has become an almost paranoid obsession with many Vietnamese, rightly so, but fake products are rampantly flooding the markets and supermarkets. Bizarrely, fake beef – beef products mixed with other cheaper meat products, or chemically camouflaged – is a very frightening trend too. Thank heavens no one has faked pasta yet. I think the vegans are on to something here although I’d never give them the encouragement…

Some scientists claim that life is a computer simulation, therefore everything is all in our heads – so the world’s fake too. If that’s the case, then being phony is probably not fake, thus making it real, so phoniness becomes honesty and truthfulness becomes insincere; so ‘being yourself’ doesn’t mean that you ever have to actually be true and natural – you can fake it for as long as you can – and since most people do that anyway, we… all of us, as fake as we probably are as genuine as we’re ever going to be. Got all that?

One thing I have to laugh about though, this likely means that Vigara and Cialis, along with rhino and elephant horn, and heaven knows what other ingredients are all fake. Sorry, guys – you’re out of luck!

So what can we do about it? Well, complain…loudly, refuse to buy or accept fake stuff and tell off your friends if you see them doing that too! It’ll take time for the idea that customers have choices but retailers will get the message sometime before 2030…

But I’m lucky to live in Vietnam because the people are great (not fake!) and especially the women!