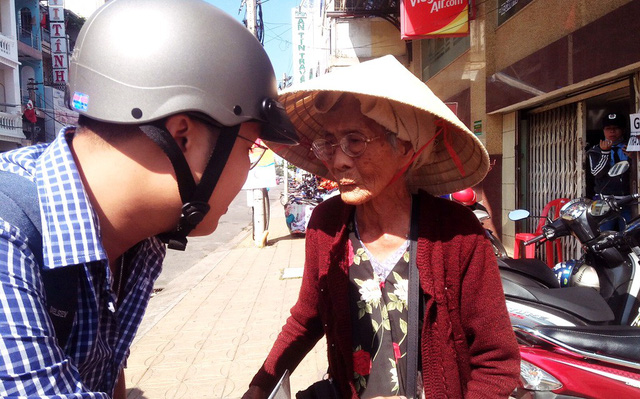 Simplicity of life in Vietnam

It’s the natural flow and pace of life in Vietnam that pull me in deeper and deeper as time goes on. People usually don’t fuss over little ups and downs, turning everything into a major controversy the way they often do in “developed” countries.

I had a couple of insignificant experiences within an hour of each other recently that captured it all so beautifully and lucidly.

I was on my way to the doctor and always hit the same rice shop on the way. Great “com binh dan” (working-class rice lunch) – an array of dishes to choose from which are displayed in a steam table along with steamed rice.

I usually bump into an elderly lottery vendor who has severe osteoporosis. She’s tiny to begin with and when walking she’s stooped over, even smaller, barely above my waist. I’ve known her over a year and always invite her for a meal whenever we cross paths. She reminds me so much of my mother who departed years ago.

She’s as sharp as a tack – lucid, energetic, and organized. She never misses a day’s work even though she’s 90 years old and has been doing her lottery sales job for over 20 years. Goodness knows what she hustled at all her life before then.

She always gives me the same grin, happy to be alive and on the move for another day, making a buck here and there. She sits down always and regroups, sorting through her tickets and money to make sure all is in order.

But this time I made a mistake: for the first time ever I bought three of her lottery tickets first, then invited her to select some items for a takeaway lunch. Her refusal of the lunch offer was very emphatic but I knew well enough to keep insisting. However, I couldn’t change her mind.

I guess she felt I would spend too much money with the tickets and the lunch together and that was that, end of conversation.

I made a mental note not to buy her tickets in the future, for she only makes VND3,000 (13 U.S. cents) in commission for each one but rejected a wonderful meal worth VND30,000 offered to her.

I finished eating and climbed the hilly street to get to the doctor’s office.

I stood around outside to cool down after lunch and the climb. After a few minutes an elderly woman gingerly stepped out of the office, obviously in ill health. I noticed a taxi pulling up and realized it was for her.

She hobbled over to me and latched onto my hand, letting me lead her to the taxi. No discussion, no request, nothing, grabbing on to me was as natural to her as drawing a breath. I was just standing there, hadn’t made a gesture or any indication of an offer of help.

That’s the way it should be, the elderly shouldn’t have to ask for anything – rather, they should expect help to be extended to them.

She very gingerly got into the taxi and away she went.

Up next was the security guard in the bakery. The place is big and bustling. It has pretty much everything under the sun. I’m in there every couple of days, so everyone knows me, at least by sight.

I often get a “banh bao” (a steamed bun with meat and quail eggs inside), the perfect evening snack for when I don’t feel like eating much. The buns are stored in an upright stainless steel display case consisting of many drawers.

You open a drawer and grab your bun with a pair of tongs and put it in a Styrofoam box. There were no tongs around, so although that display was damn hot with all those buns inside, I gingerly reached inside to scoop up my bun, careful not to touch any others or the hot steel in the process.

Within a split-second the security guard was at my side with a pair of tongs and extracted that bun in a jiffy and put it in the box for me. It wasn’t necessary, as I wouldn’t have burned myself or dropped the bun.

While it looks as though those security guards didn’t do much, they always seem to have their fingers on the pulse of the operation, and I guess he jumped on the issue extra fast because there was a foreigner (possibly ignorant) involved.

The security guard offered a smug grin, revealing his delight that another potential incident had been derailed.

It’s true these anecdotes are trivial, but I notice things like them every day in Vietnam.

Back in my country the lottery lady wouldn’t be allowed on the restaurant premises because she could be irritating the customers and the business isn’t insured for non-paying guests, so that little anecdote would never have got off the ground.

Similarly, a lot of people wouldn’t have helped the lady getting in the taxi fearing that she may fall given her fragile state and they could somehow be blamed. Where I come from, people usually fend for themselves, and the elderly are often ignored. Not always, but I’ve noticed it often enough.

And the security guard? Well, that’s not his job and I can’t imagine any guard in the supermarket or bakery back home in Canada or the USA doing what he did to help a customer.

So there would be no lottery lady, she wouldn’t sell any tickets, and she wouldn’t get offered a meal. The fact is she often gets offered lunch – I know, because on several occasions I’ve offered and the owner declined on her behalf saying that someone else was already buying for her.

The lady would have waited for either the taxi driver or the doctor’s staff to help her even though I was standing right there because that would be within their responsibilities.

The security guard probably wouldn’t have noticed – not his job. If he did notice he would holler at me from a distance, then maybe someone else on the staff would get me a pair of tongs.

And there is no end to the obsession with trivia – last time I was in a supermarket back in my “developed” home country I saw a sign on a display of peanuts that said – and I’m not joking:

“This product may contain peanuts.”

The main objective of the sign is not to deter those with peanut allergies from taking peanuts, rather because the store’s insurance company insists on it. That display absolves the store of all liability in the case that an allergic person somehow eats those peanuts and becomes ill.