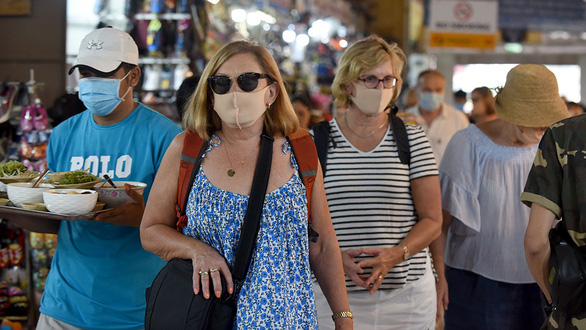 All hands, local and foreign, on deck to help Vietnam stem COVID-19

We live in an era full of uncertainty and turbulence at the best of times, but none of us could have foreseen the mess the world is in right now.

Throngs of expats and tourists are stranded here in Vietnam, hemorrhaging cash, unable to leave, their employment or vacation suddenly interrupted, and nobody knows when the coast will finally be clear.

Many foreigners are wondering, "Are we still welcome in Vietnam?"

This country has a storied history of decades spent fighting off invasions, colonizers, and miscellaneous troublemakers.

The cost in human lives has been exorbitant, but at the end of the day, novel coronavirus disease (COVID-19) is one more enemy, albeit unlike any of the others.

When the epicenters shifted from Wuhan, China to Europe and America, we Westerners were thrust into the spotlight because visitors and Vietnamese returnees brought more of the virus with them here to Vietnam.

Some Vietnamese are afraid when they see foreigners on their soil in the midst of a war against an invisible enemy.

It's impossible to separate the wheat from the chaff because the person next to us could be a carrier of the deadly virus and not be aware.

There are not many foreigners living in the center of Da Lat, so most vendors, shopkeepers, and a good chunk of coffee shop and restaurant patrons know me by sight, if not by name.

As we neared the state of "social distancing" now upon us, the tone changed, I suddenly felt an invisible yet very real barrier appear between myself and some locals as the COVID-19 focus shifted to the Western world.

The behavior of every one of my friends was unchanged, and some were even kinder than before.

A couple offered their favorite dishes or fruit; others checked on me, concerned that I was safe and comfortable.

That wall was erected by people who do not know me: students who normally would be in school, visitors from the big cities in Vietnam (who have all since disappeared), and random people who did not recognize me perceived me as a potential enemy, purveyor of illness and death.

There were no dramas, just a few comments directed at me: "What's that foreigner still doing here?" and "Look, there's a foreigner."

Call me thin-skinned, but I confess those comments unnerved me.

I wanted to shout, "Hey, this is my home, I belong here!"

Although we are on the same side, people think the virus may have chosen me as host, the way a barnacle clings to a ship, with the crew blissfully unaware of its existence.

In a few short minutes, I felt what many visible minorities feel every day of their lives, and let that sink in for a good long time.

The attitude of many foreign guests during this crisis has not been entirely positive: some partied on; others could not be bothered donning a protective mask or did not believe masks could stem the spread of the virus; and a couple have even escaped from quarantine locations, selfishly risking the health of others.

The authorities here want everyone to wear masks, so we shut up and wear them whenever we venture out of our homes.

Locals are not interested in our endless opinions and conspiracy theories, they are judging us on how we adhere to their behavioral requirements during a crisis.

The Vietnamese in general are not exactly demanding hosts, busy ramming rules, regulations, and restrictions down the throats of foreigners as is done in many countries.

People here are flexible and forgiving, they know in many cases that we Westerners do not grasp some situations, and they let it slide.

They do not ask for much, but when they do, we should comply.

Some branded foreigners as being complacent or skeptical about this danger that confronts us all each day.

Most did not jump to paint us all with a single brush, but some did, just like everywhere in the world.

Can we hold them accountable?

Given the history of the role of foreigners in Vietnam, and that life or death hangs in the balance, it is a no-brainer: we can't.

The country is kicking butt when it comes to COVID-19, and we are fortunate to be here instead of our countries where anarchy and poor leadership reign.

That is right — you got it, little ole Vietnam is leading the way globally in the fight against COVID-19.

Not Singapore, the United States, the UK, nor mighty Japan — they're all in serious trouble with each passing day and it is not going away any time soon.

Those countries wield huge economic and political power yet are now on their knees, while Vietnam is ahead of the game despite its paltry gross domestic product and misconceptions that it is some weird, backward country.

It is not by any stretch, as many foreigners are finally discovering.

I receive updates every day from my friends around the globe who are forced to queue up to get into the supermarket, only to learn once inside that staples such as eggs, bread, milk, and flour are unavailable.

The economic situation hurts most people everywhere, but the economy will rebound, it takes time and effort, and some sectors will have to start from scratch to rebuild.

In the meantime, everyone in this country is rowing the boat in the same direction, the whining and debating absent as usual.

In Vietnam, the approach is and has been that an ounce of prevention is worth a pound of cure — clear, pragmatic thinking.

Prime Minister Nguyen Xuan Phuc set the priorities from the outset, making it clear that citizens could count on the government to manage the situation: "If the pandemic continues, protecting the people's health will be the most important thing, not production or economic growth."

That's good old-fashioned common sense: there will be a way to resuscitate the economy but there is no way to bring the dead back to life.

The PM gets it, while so many other world leaders don't.

Every drop of blood is gold in this country, and all measures taken are to mitigate the potential loss of life. That's how people think; that’s where values lie.

Too many have perished in the past, so whatever measures are needed to prevent a repeat will be done.

The conspiracy theorists pop up in discussions — the government is hiding something, the numbers are fudged — they don't want the public to be afraid and panic.

A complete list of all those infected including location and circumstances has been public since day one.

In addition, Vietnam has been producing and exporting PPE (Personal Protective Equipment) to other countries throughout this pandemic.

Would the government allow exports if there was a domestic need or even a high risk thereof?

There are even machines dispensing free rice at strategic locations throughout the country for those going through the toughest times.

Many of them remember when more than half the population lived below the poverty line and rice spiked with fish sauce was the dish of the day, every day.

Next time we pop into the supermarket to pick up a few things and see no panic, queues, nor empty shelves, it will be a comforting reminder that we are in a safe and well-managed country. I'm grateful to be here.

We foreigners are welcome, we just need to comply with relatively few restrictions and tighten our belts during this crisis, just like most locals.

It is lead, follow, or get out of the way.

The authorities and little ole Vietnam are leading the way, the populace is following, and we foreigners are best placed hunkered down, and out of the way until this blows over.

Oh, the irony of it all.