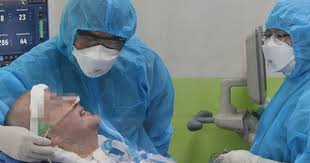 In this editorial originally written in Vietnamese and published in the June 4, 2020 issue of the Tuoi Tre daily, she commented on the miraculous journey of Vietnam’s novel coronavirus disease (COVID-19) patient No. 91 — a 43-year-old British man who works as a pilot for Vietnam Airlines — from being gravely ill to regaining consciousness and being able to smile while interacting with health workers at Cho Ray Hospital in Ho Chi Minh City, where he is treated.

Her commentary has been translated by Tuoi Tre News and edited for clarity, consistency, and coherence.

We could only imagine the eye-opening experience that patient No. 91 — arguably the most enduring case of COVID-19 in Vietnam — may go through as he is informed about the string of events that went down in his two-month period of unconsciousness.

News of patient No. 91’s positive recovery took many Vietnamese by surprise. In the overwhelming congeries of present-day news, the images of the British pilot reclaiming his ability to open his eyes, smile, and grab objects came as a delight.

Over the last two months, the stranger pilot has become a household name, being mentioned in the banter of families and friend groups. In another word, the whole country is concerned for his health.

As news about his condition gets updated to the minute, Vietnamese people have gone with him through moments of highs and lows, hope and hopelessness, wishing and praying for him to pull through.

Vietnam’s medical sector has invested its best in patient No. 91’s case, from getting top-tier doctors from across the country to discuss his situation on a 24/7 basis to scheduling personnel of Ho Chi Minh City’s hospitals to tend to the patient relentlessly.

For the medical practitioners on duty, there has been hardly any pause since patient No. 91 was hospitalized. There was also no moment of backtracking when they were faced with the accruing cost of medical procedures that the case entails.

The public also show no hesitation to step in: when doctors considered a lung transplant for the Briton, dozens of people signed up.

All these feats extraordinaire are seen as common acts of decency in a developing, resource-limited Vietnam.

It would be redundant to speak any further on the miraculous recuperation, aided by scientific and humane efforts from Vietnamese people, of the Briton.

There is one Vietnamese saying that goes, “Your best effort can triumph over fate.” As the COVID-19 fight continues, those words are upheld as a shared motto: as long as people stand shoulder to shoulder to factor in the best effort to make the right decision, even the allegedly untamable pandemic can be eradicated, and patients seemingly beyond cure brought back to life.

Though the fight is far from over, small victories like the recovery of patient No. 91 serve as a vital morale boost.

Each and every single human life is priceless. With that in mind, Vietnam’s medical professionals have exerted full forces to save a life from a near-lethal condition. The splendid recuperation of the patient paves the way for Vietnam to prove its prowess and commitment to the set of values it has chosen.

A drastic lifestyle change is apparently expected for a person who went through a near-death experience. For the British pilot, changes are surely afoot.

For the Vietnamese that went through COVID-19 in the same climate, the pandemic has also given rise to thought and contemplation.

While life is infinite and full of possibilities, human lives, on the contrary, are finite and limited. Wealth, fame, and influence can barely guide people through ordeals. The transience of life can make the switch, turning black to white and vice versa in the blink of an eye.

Yet, within the settings of life, people still have the power in their hands to shake up all patterns by stacking singular efforts, doing our individual part to create a better living environment, just like the way Vietnamese doctors have striven and succeeded in lifting the British man out of darkness and back to life.