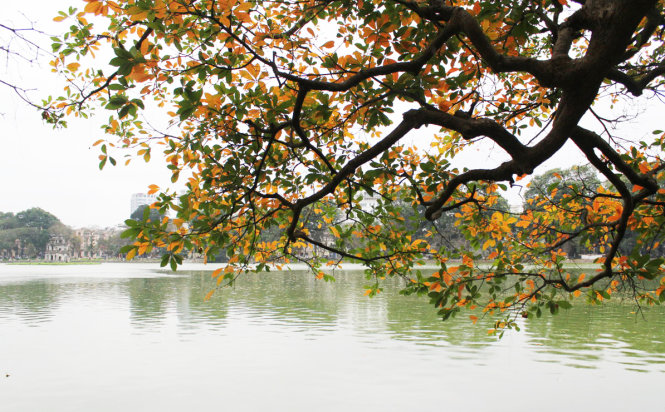 You could argue autumn in Vietnam is the peak of the tourist season, as it is not too hot and not too cold.

It runs from September to November. Hanoi becomes cooler, while the central coast and south continue to be hot but then the rains come, and come and come. Still, taking the bite off the 40-degree summer is the most attractive part.

Autumn for me is the shift from bright never-ending blue skies to the beginning of the storm season. It’s time to trim the trees and clear the street drains again. The rainy season is coming again to central Vietnam soon enough. And it promises to be a bit dozy. I hope it won’t be anything like November 2020, when Vietnam got hammered by multiple storms inside of four weeks. As if we don’t have enough to cope with already!

School starts back around this year as the summer heat dissipates, making classrooms bearable again. Hoi An is now back to Directive No. 19, meaning we can go to the restaurants again. More startling, however, is the parent-traffic chaos outside the schools. I’d forgotten the sound of kids screaming and laughing, nice though. I’ll miss the deserted streets again.

How this is going to pan out is anyone’s guess. COVID-19, winter, and lockdowns have hampered folks’ ability to make a living and afford school tuition. Thankfully, Hanoi and Ho Chi Minh City have already offered to waive fees for the coming semester – here’s hoping other provinces will follow suit.

Fortunately for the kids, the Mid-Autumn Festival is coming near the end of September; this year it occurs on the 21st but you’ll know it because all the kids are practicing their drums and dragon dancing. Apart from wearing face masks and a bit of social distancing, it should be a fun affair this year. I hope so, we’re fatigued from the lockdowns.

This one festival probably sells as many mooncakes as Lunar New Year and the candy trade will be a bit mad.

On a sunny day, if you have the opportunity to travel around the nation, it’s surprising beautiful at this time of year. Autumn colors can be stunning around parks and forests. Ha Long Bay, Phong Nha National Park, and Da Lat are all recommended for a quick break. With current reductions in tourist numbers, it is probably one of the best times ever to check out Vietnam’s scenery.

A local friend mentioned that she feels this autumn will be cheerful as she believes Vietnam is getting closer to using its own vaccines and the nation will slowly come back to some kind of ‘normalcy,’ If that’s ever going to exist again. Almost every local I’ve spoken to has reluctantly admitted that tourism isn’t coming until maybe early next year.

Also, it’s harvest time around Hoi An so we have to maneuver around the tarps spread across back streets as locals dry out the rice. Most farmers around here work in co-op arrangements, meaning they share the work of tending the rice fields while a smaller group of family-owned plots are cultivated on a more part-time basis. It’s back-breaking work but a large bag of rice, around 40 kilos, can feed a family for more than a month and folks also offer sacks of rice as gifts and as a charity thing.

Autumn is also my time to throw out all the junk I’ve accumulated over the past year. It’s surprising what I bought and used one time only! Rich foreigner, hey? The street rubbish collectors on their ancient bicycles often knock on my gate to check if I’ve got some for them. Most of them actually offer me a dollar or two and I refuse the money. Their lives are tougher than mine. Even 20,000 dong (just under a dollar) goes a long way here.

But for me, autumn really is a time to take a walk and admire the scenery. Like you are catching your mental breath and the chores can wait. I find it to be a calming time, particularly when the harvest is on and you are assuredly reminded that life goes on no matter what. I like the way nature can make us remember that change is normal, useful, and necessary. It does make you wonder why we resist change so much.

In any case, I hope you all get through the next few months without too many dramas. Besides, autumn is not forever!