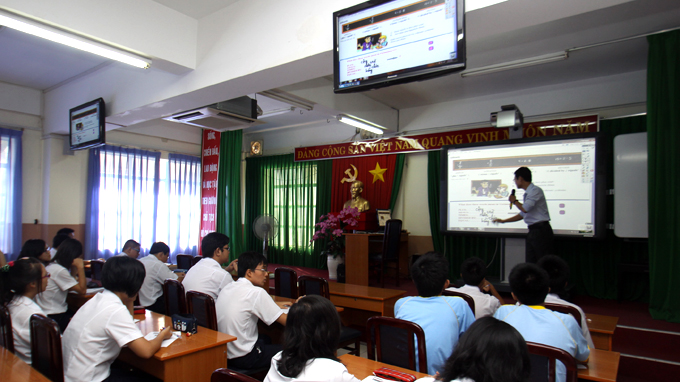 Many Vietnamese distributors of smart boards are paying their way into schools in Ho Chi Minh City and Hanoi by offering the buyers commissions of up to 15 percent on each purchase order, worth up to VND487 million (US$23,000).

Schools in these urban localities are racing to equip their classrooms with these hi-tech devices, a fad at the parents’ expense.

Smart board distributors are thus willing to pay the schools to get their products – interactive boards using touchscreen technologies – sold, a Tuoi Tre reporter has found.

A salesperson recently told the reporter, working undercover as a potential buyer, that her company was distributing the Chinese IQBoard device at VND30-32 million ($1,400-1,500) and Panasonic smart boards at VND66 million ($3,100).

She offered a 10 percent commission on a set of five IQBoards, including projectors and loudspeakers, which were priced at VND315 million ($14,900) in total.

The salesperson added that she can inflate the price upon customers’ request as long as they are to make 18-20 percent of the discrepancy payable to the company.

For the Panasonic products, she said, a 5 percent discount will be in place for an order of five sets of devices, worth VND487 million ($23,000). The buyers will receive the difference in full when they ask for any price inflation, she noted.

The woman even suggested how to overcharge students for funding the purchase and promised help in the process.

“We will help you match all the numbers in the quotations,” she said.

Up north, a salesperson in the capital said his firm was selling Korea’s U-Pointer smart boards at VND10 million ($470) per item. This price could be negotiated, he added.

Buyers will have to pay another VND10 million for a projector to be added, the man said.

The firm is willing to pay 15 percent in commission when clients agree to the VND10 million pricing for the board, he revealed.

The vice principal of a school in Ho Chi Minh City admitted that smart board sellers usually put forward 5 to 10 percent commissions to schools or those who directly place a purchase order.

Agreeing with the educator, an experienced provider of school equipment told Tuoi Tre that smart boards of all kinds of quality are sold to schools in both honest and dishonest ways, implying offering discounts is a manipulative trick.

Students and parents are the victims because they are sometimes forced to make “voluntary contributions” to pay for these devices, the provider said.

“Even worse, the same device is often purchased at different prices.”