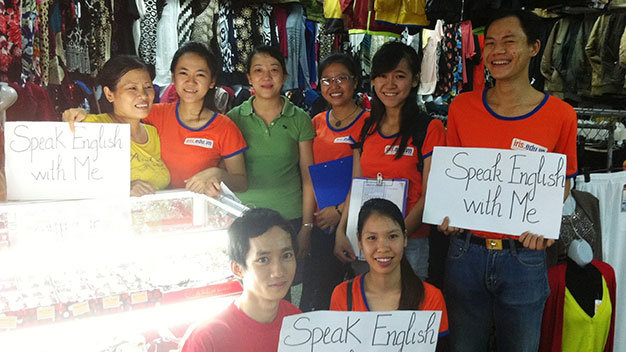 A free English club has been set up in the central city of Da Nang with a view to popularizing English for free for people, especially xe om (motorbike taxi) drivers, taxi drivers, and market traders.

The “Tieng Anh Duong Pho” (Street English) Club has been run by Doan Thi Ngoc Lan for around three months, attracting more than 7,000 followers on Facebook in the process.

Operating under the spirit of sharing knowledge, the club belongs to a namesake project and seeks to create an environment where everybody can learn English by speaking the language to other people.

On weekends, the club members take a board which says “Speak English With Me” and visit crowded places like parks, markets, and supermarkets to meet and talk in English with people interested in the language.

Some of the club members said people were surprised to see them with the sign during the first days of the project.

At that time, market traders and xe om and taxi drivers responded positively to the project, expressing their will to learn English from them.

“Some xe om and taxi drivers told us that they have had difficulties talking to their foreign customers,” Tran Thi My Hanh, a club member, said.

“So we have taught them sentences related to their jobs like greeting and bargaining,” Hanh added.

One of the things that make “Tieng Anh Duong Pho” members happy about the project is seeing the elderly trying their best to learn English, they said.

The club also teaches English and gives English books to traders at local markets like Con Market and Han Market.

“We’re old but need to know English to talk and sell goods to foreign tourists,” Phan Thi Huong, 56, a trader at Con Market said. “It’s so good when we can learn some basic sentences to communicate with foreigners. Thanks to them, I now can speak a little to my customers.”

The club chairman, Ngoc Lan, said she will launch an official project to teach English to xe om and taxi drivers and market traders in Da Nang at the beginning of next year.

The club will collect information about those target learners to make detailed plans to teach them, she added.