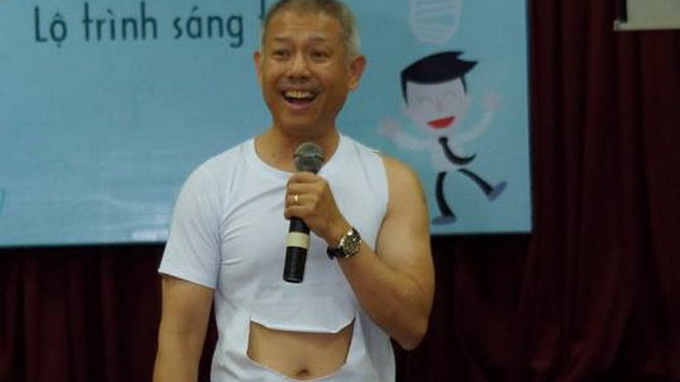 The vice chancellor of a private university in Ho Chi Minh City has made local headlines after photos emerged on social media of him giving lectures on innovation dressed in shorts.

Dr. Truong Nguyen Thanh, vice chancellor and professor of chemistry and computation at Hoa Sen University in Ho Chi Minh City, said his peculiar choice of outfit served as a demonstration of creativity and innovation.

Thanh reportedly wore shorts during lectures that were part of the Innovation Roadmap course at his university on Sunday and Monday.

Photos of the oddly dressed professor were shared on Facebook by a popular start-up expert and went viral shortly after, drawing both praise and criticism from netizens.

In an exclusive interview with Tuoi Tre (Youth) newspaper, Thanh rejected the suggestion the whole ordeal was a promotional campaign for his university ahead of the upcoming admission season.

“It is actually my course on innovation roadmap. The first thing that I teach in the course is for start-ups to develop creative thinking and the ability to innovate and break away from traditions.”

“That’s the dominant message in my classes. It’s not a PR tactic,” Thanh claimed.

“Some people misunderstand my intention because they don’t know what the course is about.”

According to Thanh, he once taught a similar course at the Ho Chi Minh City University of Technology where handed out undershirts to each of the attendants and asked them to do whatever they wanted with it.

“Of course it wouldn’t be creative if you just put it on,” Thanh said.

“Some students cut their undershirt into a headscarf, while others turned it into a dining towel. As for my part, I cut off one sleeve and cut out a large hole in the belly.

"Who says an undershirt should have two sleeves and cover your belly?"

“Why is it that Vietnamese students become successful after going abroad to pursue their study,” Thanh asked rhetorically.

“Can’t our population of close to 100 million people do the same inside our own country? What makes the difference here? It’s the environment; we are blocking our own innovation.”

Thanh said many students had been inspired by his lectures, and many were already showing interest in attending the course.

The professor said he would not have done it differently if he were to have another go, as his choice of outfit was necessary to help attendees understand the ‘box’ they were sitting in.

“As I’ve always stressed, that is not how I normally dress to class, as I usually opt for neat clothes during regular lectures,” Thanh said.

Prof. Dr. Truong Nguyen Thanh was born in 1961, and worked and lived in the U.S. for 38 years before returning to Vietnam.

Thanh owns two international patents in information technology, and has authored 180 scientific papers published in chemistry and IT journals.