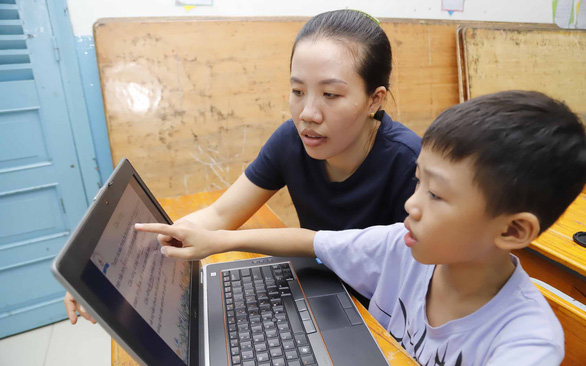 The latest coronavirus outbreak in Ho Chi Minh City has taken away the parents of 1,517 students and left thousands infected, according to the municipal Department of Education and Training’s statistics.

The orphans have lost either their fathers or mothers, or both due to COVID-19.

More than 10,000 high school students and over 3,000 teachers have caught the viral disease.

Some 62,100 students enrolled at elementary, middle, and high schools have been stricken by poverty.

As of September 11, 12,341 cadres, teachers, employees, and workers in the city’s education and training sector have lost their jobs.

Kindergarten teachers and workers were affected the most, with 10,129 people having their labor contracts canceled or postponed.

The municipal Department of Education and Training proposed the Ho Chi Minh City chapter of the Vietnam Fatherland Front Committee and socio-political organizations provide aid to students and teachers in need for the 2021-22 school year on September 10.

The department reported that 94.3 percent of 674,173 elementary school students are studying online while another 0.73 percent, who have been stranded in other localities due to travel restrictions, have been temporarily admitted to schools in those places.

Respectively, 0.2 percent and 0.07 percent of their stranded peers have temporarily attended middle and high schools in other localities.

The corresponding rates in continuing education students are 88.6 percent and 0.4 percent.

The number of students having difficulty accessing online lessons has decreased from 75,000 at the end of August to 40,000, thanks to the support of organizations, parents, and schools.

The municipal education department is coordinating with Ho Chi Minh City Television (HTV) to broadcast lessons as soon as possible, with priorities given to the first-, second-, fifth-, sixth-, ninth-, and 12th-grade syllabuses.

The southern city is the gravest COVID-19 hotbed in Vietnam with 309,787 local infections, accounting for about half of the country’s 630,661 community transmissions since the fourth virus wave’s emergence on April 27.