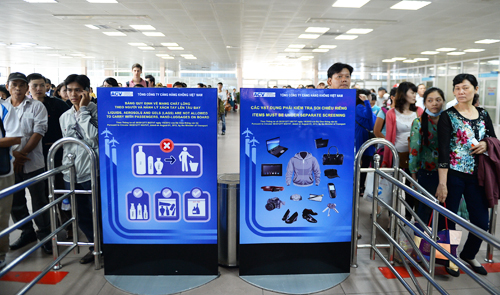 Vietnam Airlines has had many of its flights delayed for hours for security re-checks due to petty jokes by passengers.

As a result, many violators have been subject to pecuniary penalties and probation periods where they aren’t allowed to fly because the bomb jokes are ruled a threat to aviation security.

However, the jokes have been repeated.

Excluding such jokes and a number of emergency landings for technical problems, Vietnam Airlines has one of the best safety records in the country. The State-owned carrier has had only six incidents since the 1990s, two of which involved fatalities.

An offender is fined at least VND10 million (US$480), banned from flying for months, and even taken to court for the joke. Some have been fined VND300 million ($14,400) each and given probation sentences for the heavy damage they created.

I have explosives installed

Besides making jokes, some passengers admitted that they said they had a bomb as a way to vent their frustrations over lengthy flight delays.

Security worker Ta Thanh Hai at Noi Bai international airport in Hanoi recalled an incident during one of his shifts in February of last year. He received a passenger named C, who set of warning alarms at the security checkpoint. After asking the passenger to step onto a podium for a more thorough examination, C looked annoyed and said, “Check carefully. I attached an explosive to my body.”

Hai recalled that he was stunned, but kept calm and discovered nothing abnormal on the passenger’s body. However, Hai forwarded his identification papers and air ticket to the relevant team.

C later admitted that he just wanted to avenge the tardiness of his flight and was not aware that the joke was treated as a threat to aviation security.

Thanks to a similar joke, a passenger named H.V.S. was fined VND10 million and missed his flight from Hanoi to Frankfurt in August last year, as he was kept in custody inside the security center of Noi Bai airport.

The biggest worry of air hostesses is the threat of a bomb aboard a plane, as these cost a lot of time.

Flight VN 1340 from Ho Chi Minh City to Da Nang was delayed when it was about to taxi to the runway thanks to a bomb threat. In this case, the flight was postponed 90 minutes for an inspection.

What happens if my bag has a bomb, for example?

Binh recalled one incident when one of his female officers was working with a metal detector. When she placed the machine near the belt of a male passenger, he immediately said ‘There is a bomb there’.

The passenger ‘collapsed’ when he was told the fine he must pay, Binh said.

The most severe case happened in July of last year, when a female passenger named H.T.T. from Da Lat, Lam Dong Province was taken to court after she claimed to have a bomb in her bag.

When her plane had been taxiing to the runway for a flight from Hanoi to Da Lat, a hostess asked her to put her hand bag into the overhead compartment, instead of holding it in her lap. She replied with a question, “Hey, in case I have a bomb in my bag, will it explode if it’s tossing like this?”

The flight was then delayed for a security re-check.

The woman was given a suspended sentence of 15 months and fined VND100 million for ‘obstruction of air traffic’.

In another case, a woman passenger asked a security staff, “What happens if my bag has a bomb, for example?”

An official at Noi Bai’s security center said any jokes about a bomb both before and during a flight is treated as a threat to civil aviation security and the rule is universally applied in other countries.

All airliners follow the same process in dealing with bomb threats, he added.