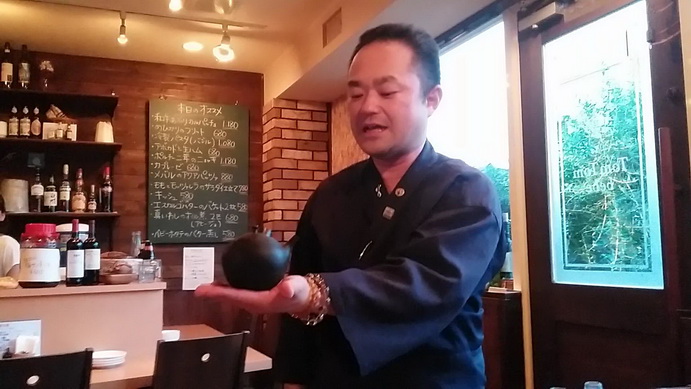 He is a regular contributor to the newspaper’s special spring edition over the past few years, having penned in-depth articles on Vietnamese tea and long-running tea drinking traditions.

Dung was amazed to know tea artisan Satoru Yabe had covered 600 kilometers to reach Nagoya City, the capital of Aichi Prefecture, just to showcase his cold tea ceremony flair to the Vietnamese visitors.

The artisan, donning a traditional Japanese costume, gracefully stepped into the room where the modern-style tea ceremony was held.

He was wearing a pair of wooden clogs and carrying a suitcase typically used by pilots, which gave him an air of enigmatic elegance in today’s digital world.

Learning that Dung is the author of a book on Vietnamese tea, Yabe gave him a firm, respectful handshake.

“I know Vietnam is the cradle of tea, with the aromatic drink emerging in your country even earlier than in China,” the Japanese artisan said.

Yabe’s comment came as a great surprise to Dung, as not many Vietnamese people are aware of this fact.

He slowly took out four first-class crystal goblets which he designed himself.

The expert then asked the restaurant staff for a container of ice cubes and a bottle of cold water before commencing his show.

Yabe carefully opened a packet of premium sencha, called gyokuro, or 'Pearl Dew,' which he prepared himself.

Sencha, first created by Soen Nagatani (1681-1778) in 1738, is a type of Japanese ryokucha (green tea) prepared by infusing the processed whole tea leaves in hot water.

As opposed to matcha, or powdered Japanese green tea, where the green tea powder is mixed with hot water and therefore the leaf itself is included in the beverage, sencha is the most popular tea in Japan.

In 1841, in the Ogura area of Uji in Kyoto, Shigejyuro Eguchi perfected the gyokuro processing method, basing it on the technique currently used to process sencha.

“Gyokuro tempts even the most jaded palate with its ephemeral sweet taste, lingering scent, and a large amount of theanine, a relaxing and nondietary amino acid found exclusively in tea buds,” he explained.

To get the standard raw tea needed to prepare the first-grade gyokuro, the tea farm is shielded for a few weeks with a straw-covered frame in order to control the photosynthesis needed for the roots to acquire the necessary amount of vitamins and keep the chlorophyll intact.

The raw ingredients are only collected in the spring crop.

The whiz filled the four goblets and the earthen pot with ice cubes before manipulating the cubes into his desired position with a chopstick.

Dung admitted it was the first time he had seen a type of Oriental tea served in European-style glasses, which represents an intriguing blend.

Yabe then filled the sphere-shaped, shock-proof earthen pot with sencha, adding he had designed the pot himself and had it crafted at Tokoname Kyusu Lab, one of Japan’s most reputable tea pot makers.

Next the ‘conjurer’ poured a little cold water into the pot, shaking and stirring it with great finesse.

The alluring display reminded Dung of bartending stunts popular in Europe and the Americas.

After around five minutes, Yabe dexterously poured the concocted tea from the spout into the goblets.

The wizard kept lengthening and shortening strips of the aromatic, chartreuse liquid to the amazement of his audiences, with the silky strips reaching up to 100 centimeters in length.

As Dung savored a sip of Yabe’s concoction, striking differences between his drink and iced tea, a common refreshment in Vietnam, sank in.

Sencha and ice cubes are seen after the concocting process is complete.