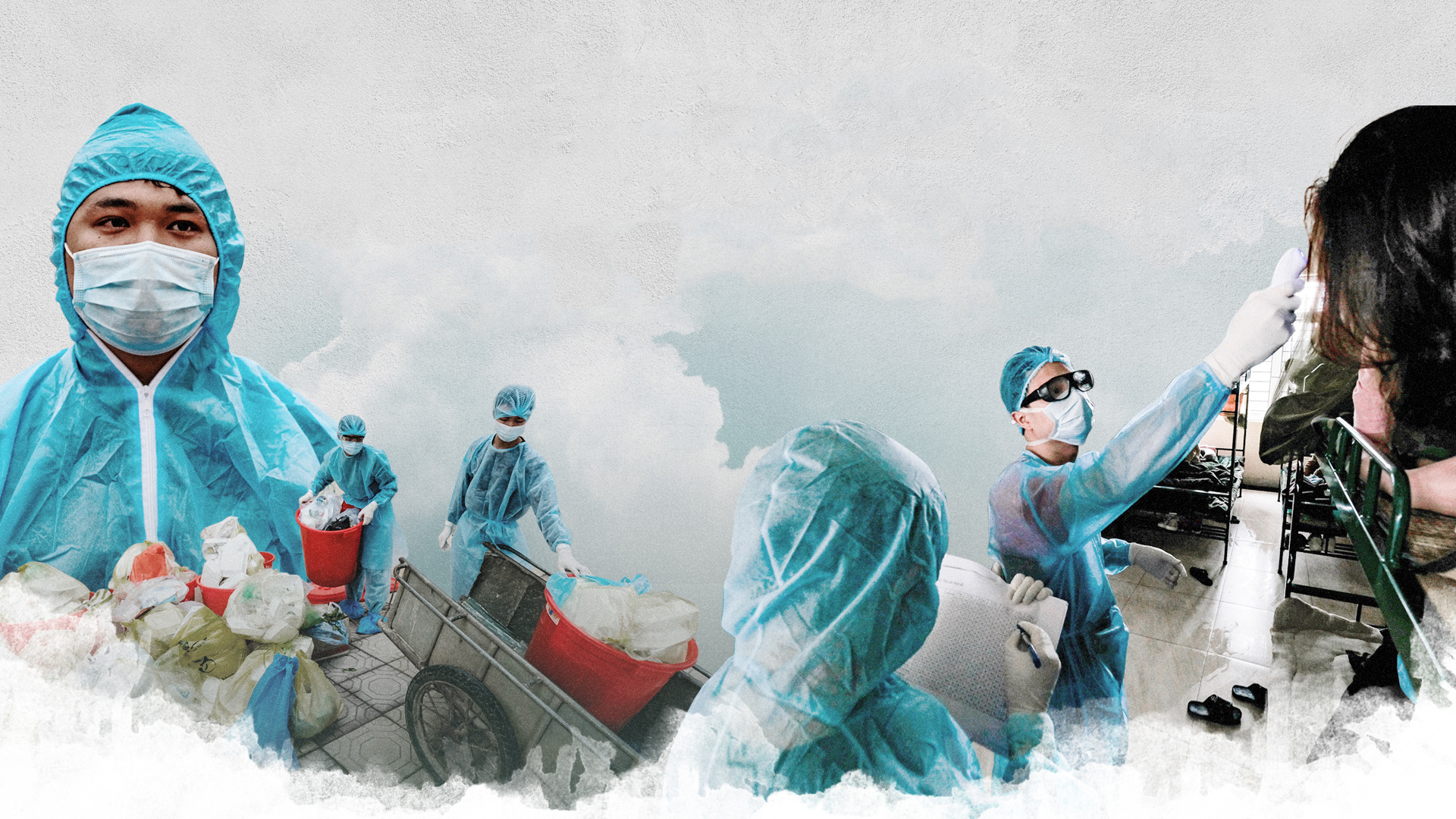 The real-life ‘supermen’ in Vietnam’s fight against COVID-19

‘Blue supermen’ is the endearing nickname given to the medical workers and staff who run Vietnam’s centralized quarantine camps for novel coronavirus disease (COVID-19), thanks to their full-body blue protective suits.

Nguyen Phu Trung works as a nurse at a military facility in Hanoi that has been turned into a COVID-19 isolation area.

Every morning, at 8:00 am sharp, Trung slips into his protective gear and log in to a quick video chat with his wife and kids – his only chance to squeeze in some 'quality time' before taking his place on the front line of Vietnam’s fight against the COVID-19 epidemic.

Trung’s coworkers often joke that the call is his 'daily mission report' to his wife, and Trung laughs along.

He knows the few minutes with his wife and kids is all it takes to turn a stressful job into an optimistic duty.

“I call my family every morning. Seeing each other over the phone helps ease my worries,” Trung said.

The situation is rough on the family. Su, his eldest daughter, usually cries during the chat. It takes Trung all he has to hold back tears himself.

“Don’t be mad, OK? When I finish my job, I’ll come back home to you,” Trung told his daughter, having only enough time to remind his wife to take good care of herself and their two children before heading off to begin the day’s work.

Twice a day, in the morning and afternoon, Trung covers himself from head to toe with protective gear before visiting each room in the isolation facility to take each guest’s temperature, ask if they are experiencing COVID-19 symptoms, and hand out face masks.

Vietnam has been very quick to mass-quarantine suspected or exposed cases to stem the viral transmission since the outbreak started to escalate in March. Everything is free inside these collective isolation zones.

“My roommates call them ‘blue supermen’ because they put themselves at risk of infection to visit us each day,” said Truong Thi Lien, 38, a guest in isolation at the facility.

That nickname, 'blue supermen,' seems to have spread throughout the facility.

As Tung and his colleagues approach a room, the facility’s corridors fill with the sound of children alerting their parents, “The blue supermen are coming!”

Returning home from an epidemic-hit region on February 27, Lien and 157 other Vietnamese citizens, including five Vietnamese-Korean children, were transferred to the isolation facility and assigned to 12 rooms equipped with bunk beds and Wi-Fi to wait out their 14-day mandatory quarantine.

“Doctors visit us regularly, and the soldiers ensure we get enough food and sleep,” said Nguyen Thi Lanh, 24.

“They bring anything we need to our rooms at our request, even if it’s just toilet paper,” she said, adding that sometimes the soldiers offer to spend their own money buying milk for children staying at the facility.

In turn, the isolated help the soldiers whenerver they can by reminding one another to conserve electricity, clean their rooms, and keep public areas clean.

The facility itself has established three layers of restriction. The outermost layer is accessible to family members of those in isolation who come to drop off goods for their loved ones.

The middle layer is for the logistics team, comprised of 20 staff members who prepare food and take care of administrative tasks.

The innermost and most strictly guarded layer is the quarantine area.

Inside this area, apart from those in quarantine, are five medical workers and more than 30 soldiers tasked with directly serving and caring for the facility's guests.

Lieutenant Vuong Thanh Nam is one of those soldiers.

Rain or shine, Nam wakes up early, puts on his protective gear, and begins work.

According to Nam, he and several of his colleagues suffer side effects from near-constant contact with disinfectant, such as dried and peeling skin.

“On hot and sunny days, wearing this suit makes it feels much hotter and going up and down the stairs becomes a challenge,” Nam said.

“But for everyone’s safety, we have to wear [the suit] until the end of the day and can only take it off when there’s no more work to do.”

The 25-year-old lieutenant was recently married, but because of the pandemic, he has not seen his wife for weeks.

“We don’t mind the difficulties because it is worth sacrificing for the people,” he said.

“The hardship and fatigue of this job are no match for the love and support we receive from everyone.”

Cu Chi, an outlying district of Ho Chi Minh City, is infamous for its dryness and extreme heat under the March sun.

The weather during this time of the year is hot and muggy, making being outdoors a daunting task in itself.

However, soldiers from a local military regiment stationed at a makeshift hospital for COVID-19 treatment are constantly on the move in the extreme heat making sure meals arrive on time to those in isolation.

The patients in treatment at the facility have grown accustomed to the ‘clicking’ sound coming from the soldiers’ four-wheeled food carts.

Under the burning sun, the sound never seems to rest as the soldiers work around the clock to keep the temporary residents fed and happy.

When the noise finally stops, it usually means the soldiers are taking one of the few breaks they are afforded to enjoy a meal of their own.

Le Thanh Cong of Gia Dinh Regiment in Ho Chi Minh City has received wholehearted support for his work, not only from his family but from his fiancée as well.

The couple had initially planned to tie the knot once he finished his military draft at the beginning of 2021.

“The COVID-19 epidemic is unpredictable, but as long as it’s still there I will continue to be a part of this fight. My wedding can wait,” Cong said.

It has been over two months since the 300-bed COVID-19 makeshift hospital in Cu Chi District opened on February 10.

Cong is among the two dozen soldiers of Gia Dinh Regiment who have been seconded there to take care of catering for the patients in treatment.

They have divided themselves into two groups of 12, taking turns to work 24-hour shifts.

The hospital has six isolation areas separated into two clusters of buildings about 300-400 meters apart from one another.

To provide food and supplies for the people staying here, the soldiers must rely on rolling food carts and bikes to make getting around easier and quicker.

“We were a bit afraid when we first heard about the epidemic. In my family, I am the only child, so everyone was greatly concerned and constantly reminded me to be more careful when making contact with the people in isolation,” Lieutenant Bach Trong Dai said.

“It took a lot of reassurance, but I’ve managed to calm them down.”